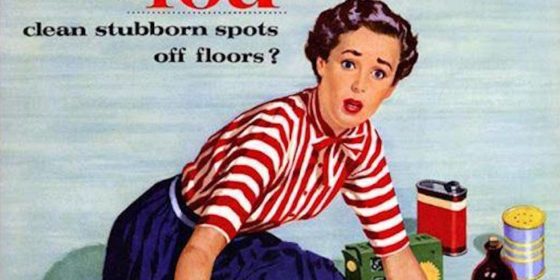 The British Advertising Standards Authority (ASA) is calling for stronger regulation of ads.

The authority is suggesting ads mocking people for not conforming to typical gender roles, should no longer get approval.

Adding, ‘specific forms of gender stereotypes in ads can contribute to harm for adults and children.’

There will not be a blanket ban on stereotypes. For example, the ban stop images of a woman cleaning or a man doing DIY.

However, decisions would take place with context in mind leading these kinds of ads, struggling to get approval:

What do the new guidelines say about LGBTI people?

LGBT advocacy group Stonewall fed into the report arguing that gender stereotyping and the inaccurate portrayal of LGBT+ people is bad for young people.

One focus group noted a ‘significant proportion of bullying was due to children‘s perceived gender nonconformity’.

The Chief Executive of the ASA, Guy Parker said:

‘Portrayals which reinforce outdated and stereotypical views on gender roles in society can play their part in driving unfair outcomes for people.

‘While advertising is only one of many factors that contribute to unequal gender outcomes, tougher advertising standards can play an important role in tackling inequalities and improving outcomes for individuals, the economy, and society as a whole.’

Participants in the report say transgender people are ‘invisible in advertising, except where they were portrayed in a pejorative way.’

‘Tackling gender stereotypes in the media is important for many trans people.

‘This is because their attempts to come to terms with gender are complicated by their failure to fit stereotypes which, frankly, few other people fit either.’

However, they believe the fight is far from over:

‘Getting positive representations of trans people, intersex people, and other minorities into advertising is harder.

‘Today’s report is an important step for the industry because the adverts we see today are simply not representative of the population.’