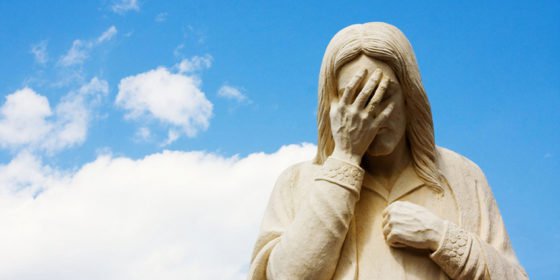 An Illinois Catholic bishop believes same-sex couples should repent on their deathbeds in order to have funerals within the church.

In a decree, Bishop Thomas Paprocki said same-sex couples need to show ‘some signs of repentance’ to have funerals.

He wrote: ‘Unless they have given some signs of repentance before their death, deceased persons who had lived openly in a same-sex marriage giving public scandal to the faithful are to be deprived of ecclesiastical funeral rites.’

This basically means if you enter into a same-sex marriage, you must repent for that sin before you die.

He also believes the Catholic church should have no place in blessing same-sex marriages or allow married same-sex couples to receive Holy Communion and sacraments of initiation.

He decreed: ‘A person living publicly in a same-sex marriage’ will ‘not receive the sacrament of Confirmation unless he or she has withdrawn from the objectively immoral relationship.’

Children must be strictly brought up ‘in the Catholic faith’ with no deviations. This means a same-sex couple isn’t allowed to sponsor their own child for initiation rites.

This position is in stark contrast to the position of the Pope, the head of the Catholic church.

‘It was a great pleasure and honour for me and Gauthier to be welcomed by the leader of the Catholic church. XB,’ Bettel tweeted.

The Vatican also appointed a pro-LGBTI campaigner to consult on their public relations team.

Father James Martin is the author of Building A Bridge: How the Catholic Church and the LGBT Community Can Enter into a Relationship of Respect, Compassion, and Sensitivity.