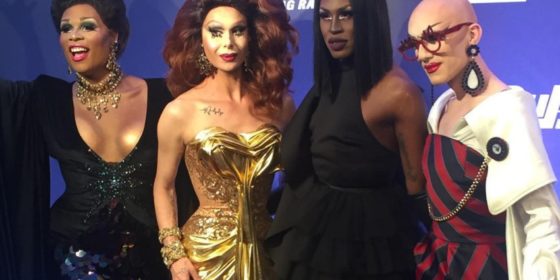 Warning! This post contains spoilers for the finale of Season 9 of Rupaul’s Drag Race

Sasha won $100,000 along with a slew of other prizes and gave an inspiring winner’s speech.

‘Let’s change shit up, let’s get inspired by all this beauty… and change the ‘muthafucking’ world,’ she said.

Peppermint, southern belle Trinity Taylor, Shea Coulee and Brooklyn’s very own Sasha Velour were named the top four after host RuPaul decided not to eliminate anyone before the final.

The shocking finale capped off a season full of twists and turns. From Charlie Hides lacklustre lip synch to Valentina’s #mask4mask controversy, season nine was one of the highest rated of all the Drag Race seasons.

The top four queens received video messages from celebrities inlcuding; Katy Perry – for Sasha, Blac Chyna – for Shea who she played in a challenge and Saturday Night Live’s Bobby Moynihan  – for Trinity.

‘Being a proud trans woman is not incompatible with being America’s Drag Superstar,’ Cox said in her message.

Battle to the crown

For the first time in Drag Race ‘herstory’ all top four finalists faced off against each in a round robin style lip sync battle.

The order of the sudden death lip sync showdown was decided from a spinning wheel spun by RuPaul, the queen whose name came up first would choose her competitor.

Trinity came up first and decided to battle against season nine’s ‘lip sync assassin’, Peppermint. They battled it out to Britney Spear’s Stronger. Peppermint unequivocally slayed with a double wig and dress reveal to boot Trinity ‘The Tuck’ Taylor off the show.

Sasha and Shea then performed to So Emotional by Whitney Houston, with the former ripping petals from a single stem rose as her schtick. Sasha then definitively won the lip sync when she slowly ripped off her wig and hundreds of rose petals cascaded down over her head from underneath the wig.

The top two, Peppermint and Sasha, lip synced against each other to Whitney Houston’s It’s Not Right But It’s Ok.

Season to the nines

It has been a massive year for RuPaul who came in to season nine as an Emmy winner for Outstanding Host of a Reality Competition Series.

Lady Gaga was a guest judge on the first episode which aired on new network VH1 to a record-breaking 1 million viewers.

Drag Race was renewed for a 10th season and also won an MTV Award for Best Reality TV Show in May.

Earlier this week it was announced that RuPaul would get his own star on the Hollywood Walk of Fame.