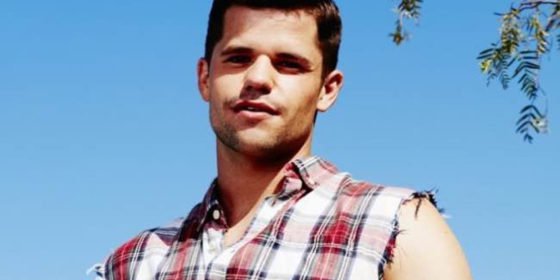 For actor Charlie Carver, coming to terms with being gay became much more difficult after finding out his father was too.

In a raw essay for Playboy.com, the actor shares what it like to deal with.

He writes: ‘At 11 years old I found out my father was a faggot. I hate that word, but it’s precisely how the news resonated with me at the time, so I will write it.’

The year was 1999 before even same-sex civil unions were legal in any states and a year after college student Matthew Shepard was tied to a fence and left to die in a notorious anti-gay murder.

‘I’d already conditioned myself to believe that any expression of gayness could lead to being tied up to a fence, and so you bet I was doing my damndest to pass in a disguise of frosted tips and Team USA soccer jerseys,’ Carver writes.

‘But with Dad’s news, the hammer finally fell on a loaded chamber and I was forced to reckon with what felt like was a shameful inheritance. My blood felt tainted. I assumed his was.’

This led to dramatic changes in the younger Carver.

‘By the end of that year, I’d changed my name, lost 30 percent of my body weight, asked to die and was filled with such profound despair that, looking back on family photos from the time, I still don’t recognize myself.’

He struggled to rebuild himself and now, at 28, finds himself in a healthy place.

Carver is best known for his roles in Desperate Housewives, Teen Wolf and The Leftovers alongside his straight identical twin brother Max Carver.

But earlier this year he appeared without Max in the first episode of the ABC miniseries When We Rise about the history of the gay rights movement. He also had a role in the recent feature films I Am Michael and Fist Fight.