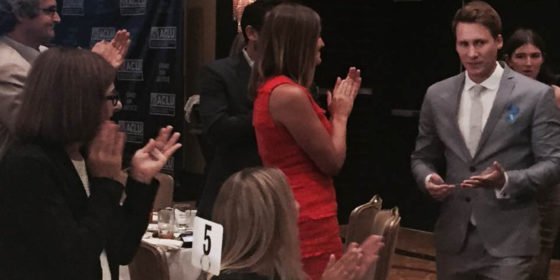 Dustin Lance Black says the award given to him by the American Civil Liberties Union will be the most important prize he will ever get for creating When We Rise.

Black was presented with the ACLU of Southern California’s Social Advocacy in the Media Award on Friday (24 June) for the TV miniseries which told the story of the LGBT rights movement from the 1968 Stonewall Riots to the present day.

Before launching into a powerful speech that resulted in a standing ovation, the jet-lagged Oscar winner confessed to the crowd at The LA Hotel in downtown Los Angeles: ‘I’m sorry, I just flew in from London and feel like I might be on mushrooms right now.’

The writer-director-activist, who won the Oscar for his screenplay for the 2008 film Milk, lives in London with new husband Tom Daley, the Olympic diver.

Black said the idea for When We Rise came as he was walking up the steps of the US Supreme Court in 2014 for the case that would result in the high court upholding the overturning of Proposition 8 and restoring same-sex marriage in California.

He began to worry back then that the LGBT community could be drunk on its own success and not be there for other oppressed groups.

The election of Donald Trump as US President and other setbacks for those seeking equality made those fears a reality.

‘The lesson is we have to rise up and lock arms and see our interconnectedness with other social justice movements and start to march forward again,’ Black said.

Black’s award was presented by actor TR Knight who was part of the large ensemble cast of When We Rise which aired in February and March on ABC.

‘Lance has created something in When We Rise that not only honors the great minds and the hearts of the people that are directly responsible for bettering our lives today, but it also gives a younger generation a picture of these heroes,’ Knight said.

‘And that inspiration will have a ripple effect more powerful than we know.’

The ACLU stated in its program that the miniseries ‘reminds us of what America looked like and how much advocacy it took to get where we are today.

‘The relevancy of When We Rise goes beyond the issues faced by LGBTQ people, as it speaks to the struggles for justice – and gives hope – to all oppressed groups.’

In addition to Knight, others at the event supporting Black were When We Rise cast members Guy Pearce and Kevin McHale as well as producer Bruce Cohen.