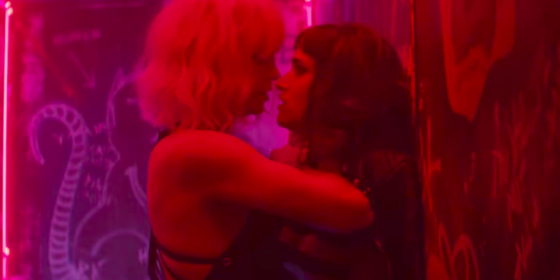 In Atomic Blonde, Theron plays Lorraine Broughton who is a bisexual MI6 spy.

Instead of following the Hollywood cliche of the female lead falling in love with the male lead, Broughton has sex with a fellow female spy (Played by Sofia Boutella).

‘I just loved it,’ Theron says on Broughton’s sexuality. ‘For so many reasons: My frustration of how that community is represented in cinema, or lack thereof.’

GLAAD’s 2017 Studio Responsibility Index discovered only 23 (18.4%) of the 125 films they reviewed contained LGBTI characters. Of those 23 movies, only 13% featured a bisexual character.

Theron and Boutella get intimate in a club

‘It made perfect sense. It just suited her.’

Theron added: ‘It made perfect sense. It just suited her. It just felt there was a way through that relationship and the fact that it was a same-sex relationship to show a woman not having to fall in love, which is one of those female tropes. “It’s a woman; she better fall in love — otherwise, she’s a whore!”‘

GLAAD’s report also acknowledges bisexual people are less likely to be out to family and friends than their gay and lesbian counterparts.

She spoke about how important the all-female love scene is: ‘It’s not something we see enough of in cinema, these kinds of relationships or exploration,

‘It’s very real. And we’re so scared of it. And it’s beautiful in the film. It’s very sexy. The two of us talked a lot about how it’s about time that women can own their sexuality the same way males get to in movies.’

See the trailer for Atomic Blonde below. It is released 28 July.