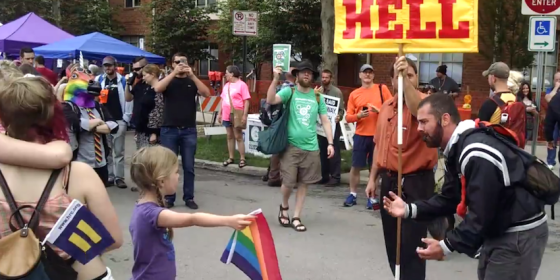 Christians are demanding Facebook add a cross alongside the temporary Pride emoji.

Though some people have been particularly happy about Facebook introducing a rainbow flag emoji in celebration of Pride month, others don’t.

But for some Christians, they felt left out because they didn’t have an emoji of their own.

Former television and radio evangelist Joshua Feuerstein shared a photo demanding there be a cross reaction emoji for those against the LGBTI community.

Feuerstein has over 2 million followers which allowed tons of angry Christians to express how they felt, siding with the evangelist.

However people supporting the LGBTI community quickly clapped back by flooding the post with Pride emojis. People were also not afraid to share their opinions against the photo.

‘Fine, but in response give me a Star of David react, or a Crescent Moon and Star for Islam, or a Pentacle. The Dao Yin Yang symbol? Or the Hindu Aum? To give just the Crucifix would alienate all other religions and peoples,’ wrote one user.

‘The Pride Flag, on the other hand, is meant to show support to a people who have had their liberties infringed on. It is for men and women who have been ostracized from society. People who have been bullied and belittled and shamed their whole lives, some to the point of suicide, for the mere fact that they love someone of the same sex/gender.’

Another said: ‘I have to laugh at all the “persecuted Christians” really?

‘If only you lived in a world where you could worship a “god” of your own choosing without the threat of death by your government, where you could build great chapels to worship and maybe just maybe these places could be exempted from paying taxes or wear token images freely maybe even around your necks… oh wait you do… maybe you all need to look up the definition of persecution.’