Caroline Ansell and Theresa May

The MP for Eastbourne is running for reelection in the upcoming general election, but Buzzfeed reveals she received funds in the form of an intern from the Christian Action Research and Eduction (CARE) charity.

Official documents reveal CARE pay for the costs of the intern, totalling £8,470. Ansell declared it as a donation.

In 2009, CARE came under fire for links to conversion therapy practices for LGBTI people, effectively trying to turn them straight.

After the allegations emerged, many MPs who received donations from CARE ended their professional relationship with the organization, yet Ansell employed the intern in September last year.

The intern’s placement is due to end in July 2017. 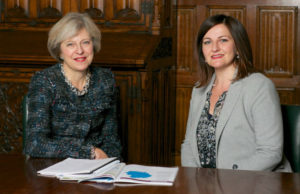 In response to the allegations, Caroline Ansell said: ‘The fact is, society should be tolerant of everyone’s beliefs. That is the message I take around my constituency and to parliament. It will also be the message I hope to see and advocate at Eastbourne Pride this summer.

‘The intern from CARE was quite simply the best candidate for the job and I would hope that no one would like me to discriminate against someone because they are a person of faith?’

Ansell is also a member of the Kings Church in Eastbourne, connected to the infamous anti-gay King’s Arms Church.

The King’s Arms Church was exposed for attempting to heal gay and transgender people through ‘quasi-exorcisms.’

Adams attended services at the church as a local Bedfordshire borough councillor and even spoke at external church events.

One testimony against the church comes from transgender teenager Abi: ‘Convinced I was demonically possessed, my parents made the decision to move to Bedford,’ reports the Guardian.

Talking about church founder Philippa Stroud, Abi said: ‘I was wrong and the so-called demons inside me were wrong. The session ended with her and others praying over me, calling out the demons. She really believed things like homosexuality, transsexualism and addiction could be fixed just by prayer, all in the name of Jesus.’