Vinny Ohh, 23, is a Los Angeles-based makeup artist who strives to be a ‘genderless alien.’

So far, Ohh has spent about $60k on surgeries and other procedures to achieve this look. Now, Ohh is heading into uncharted territory – being the first to receive ‘gender unassignment surgery.’ Basically, Ohh doesn’t want male or female sex organs. They want their genitals removed entirely.

‘Let me be sexless! LET ME BE FREE. THROW ME AWAY ALREADY,’ Ohh writes on Instagram.

However, many plastic surgeons are telling Ohh that this may not be possible. It has never been attempted before, and thus carries many risks.

‘The experimental nature of the procedure means it is highly risky and it could also impact on basic bodily functions such as [Ohh’s] ability to urinate,’ says Dr. Simoni, a Beverly Hills plastic surgeon. ‘This would be a brand new procedure and if something happens or there are complications, we don’t have any idea how to address it.’

‘Also, the sexual organ is also a tool to urinate, there are muscles that hold the urethra and prevents not only the urine flowing out, but also the bacteria going back up,’ Dr. Simoni continues.

Some surgeons have suggested Ohh transition to female first, but they’re not interested in that.

‘I don’t want to become a woman, I just want to have nothing,’ Ohh states. ‘My goal in regards to my look is to become an exact, scientifically proportioned, sexless human being.’ 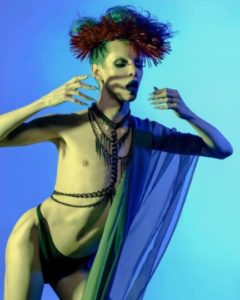 ‘People talk about “gender reassignment” but I’m looking to have “gender unassignment.” I’m looking to change my genitals so there is nothing there. There will just be a hole to pee out of.’

The wary surgeons also worry Ooh will change their mind years down the line, but according to those close with Ohh, that’s not likely to happen.

‘I do worry that he’ll change his mind about surgery later in life but the more we talk about it, the more it actually feels like this is actually truly what he needs and wants to be more authentically him,’ says Ohh’s sister, Daniella.

Ohh’s manager, Marcela Inglesias, concurs with this. ‘I support Vinny’s transformation into becoming a genderless human. If he is ready to do it, and the doctors approve the surgery legally, I will be with him by his side.’