A church pastor who has referred to homosexuality as part of the “darkness” has won a local government award for “outstanding contributions” to the community.

Pastor Michael Olawore, of New Wine Church in Greenwich, south London, has repeatedly referred to homosexuality as a sin throughout his five years at the church’s helm.

Despite this, he was personally handed an award at the ceremony in March, for “activities and initiatives which support the local community and beyond”.

This also meant he was included in the “extraordinary people who have made outstanding contributions to the Royal Borough of Greenwich”.

New Wine Church was founded by Tayo Adeyemi, who has called homosexuality “a warped sexual identity” which is used to “tear down the family”.

And last week, the church played host to Enoch Adeboye, a pastor who has referred to homosexuality as an “evil” which will destroy humankind, local news site 853 has reported.

“If this evil is allowed to stay, there will not be new born babies again in the world.”

In his first essay since taking up his role as pastor, Olawore included homosexuality and gay marriage alongside poverty, war and terrorism in a list of things which made up our “world of darkness”.

The speech was called “This Is My Time To Shine!”

Since then, he has consistently referred to homosexuality as sinful and dangerous in his weekly sermons.

In one, the pastor wrote that when Jesus died on the cross, he “became sin in order that we may become righteous in God’s eyes.

“He became everything that mankind could become; he became sorcery, lies, malice witchcraft, homosexuality, sickness, poverty”. 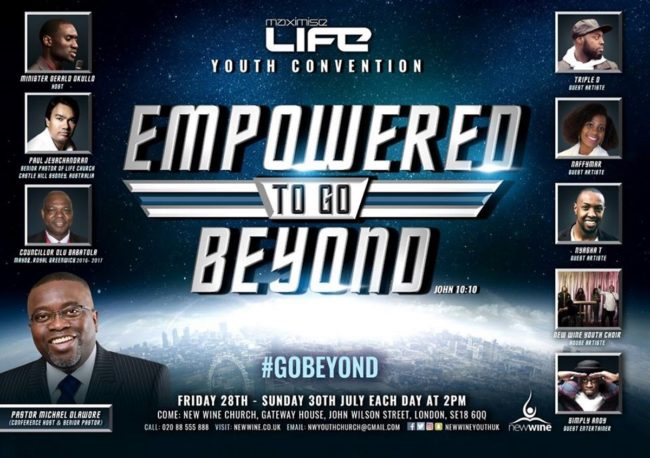 Another saw Olawore include “lesbians and homosexuals” in a list of people who he said god loves – a list which also contained “the murderers, cheats, gossips and liars.”

And the pastor has also spoken about blasphemous people believing in “a god that encourages divorce, homosexuality, teenage sex and pregnancy, cohabitation, adultery, fornication, all forms of sexual perversion and pornography.”

And at the ceremony, Greenwich’s outgoing chief executive John Comber said the award was “in recognition of the organisation’s outstanding leadership and services to the community”.

He continued: “It is staggering how the efforts of New Wine Church can truly make a difference in addressing various community problems.”

A spokesperson for the council said: “Organisations are judged on the nominations and information provided to the panel by the nominees at the time and the Council was not aware of these allegations at the time of the award being made.

“Upholding the values of equality, acceptance and diversity are of the utmost importance to us.

“The Council will now be carrying out a review of the Civic Awards process, so that we can look at how we can square our awards system to ensure any organisations or individuals being nominated fully embrace the Council’s values of equality and diversity.

“We are a proud organisation who had their first LGBT+ pride this year in partnership with Greenwich and Docklands festival.

“We have a long-established LGBT network which we liaise with, and we fund Metro, one of the most successful LGBT organisations in the country, to deliver a range of programmes and projects.‎”

There was no answer given by the council as to whether it would reverse its decision and take the award away from the church.

New Wine Church had not responded to a request for comment at the time of publication.