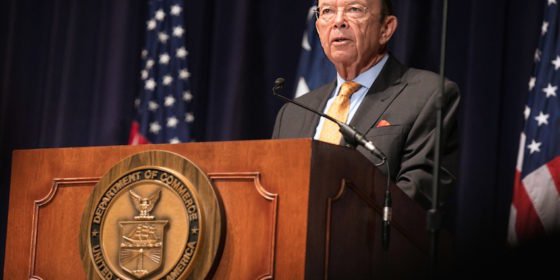 The Trump administration’s Department of Commerce, led by Secretary Wilbur Ross, removed mentions of gender identity and sexual orientation from the list of categories protected from discrimination in their Equal Employment Opportunity (EEO) statement. After blowback, these categories were reinstated.

This decision outraged many LGBTI groups and Democratic politicians. While the exclusion wouldn’t necessarily affect the legal rights of LGBTI individuals, it made employees feel unwelcome, according to Buzzfeed News.

‘It is appalling that the Commerce Department is changing the language of its equal opportunity policy statement to exclude LGBT Americans. While LGBT employees of the Department remain protected under the government-wide policy instituted by former President Obama, this decision by Secretary Ross sends a signal that LGBT Americans are not welcome at the department he leads,’ Steny H. Hoyer, a Democrat in the House of Representatives, said in a statement released on 15 June.

‘In addition to the injustice of his move, the Secretary ought to reflect on the role of the LGBT community in our economy and the importance of LGBT businesspeople in creating jobs and expanding trade to benefit our country and its workers.’

‘The Department of Commerce’s latest move to exclude sexual orientation and gender identity in their Equal Employment Opportunity statement is mean-spirited, deceptive, and irresponsible,’ David Stacy, Government Affairs Director for the Human Rights Campaign (HRC), said in a statement on 15 June.

‘Cutting specific mention of sexual orientation and gender identity protections is a slap in the face to LGBTQ federal employees who proudly serve at the Department of Commerce and sadly signals that this administration does not value them.’

Stacy, as well as Hoyer, urged the Department of Commerce to restore the language of the 2016 EEO statement.

Response to the backlash

Since these statements were released, the Department of Commerce has modified their EEO statement to include gender identity and sexual orientation again.

‘Secretary Ross has directed the Department to reissue the policy statement to address any concerns and prevent misinterpretation.’

Yet, some LGBTI advocates believe this revision isn’t enough.

GSN has reached out to the Department of Commerce for comment.