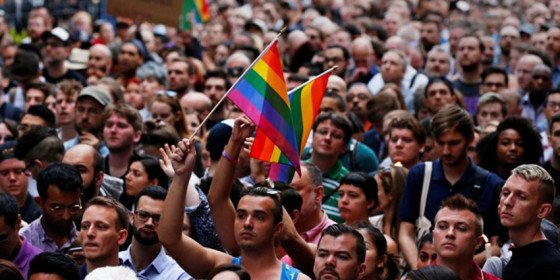 More LGBTI people were killed in the United States in 2016 since record-keeping began, and that does not even include the numbers from Pulse.

While not every person who died in the Orlando shooting was LGBTI, the majority were. Including these victims, murders of LGBTI people rose 217% last year.

But even if you exclude the victims from 12 June 2016, 28 Americans who identified as LGBTI were killed.

With Pulse, the number is a staggering 77 people who were killed due to homophobia, biphobia or transphobia.

‘The enormous tragedy at Pulse Nightclub, in concert with the daily violence and discrimination that pervades our lives as LGBTI people … have created a perfect storm of fear and trauma for our communities this year,’ Melissa Brown at the Kansas City Anti-Violence Project, a member of the coalition, said.

The coalition has released the report since 1997.

The vast majority of the victims were black or hispanic, at 79%, and 68% were transgender.

People of color and those with disabilities were more than twice as likely as whites and the able-bodied to be victims of harassment and non-fatal forms of violence, according to the report.

Most of the victims knew their attackers, who commonly included employers, neighbors, landlords and family members, it said.