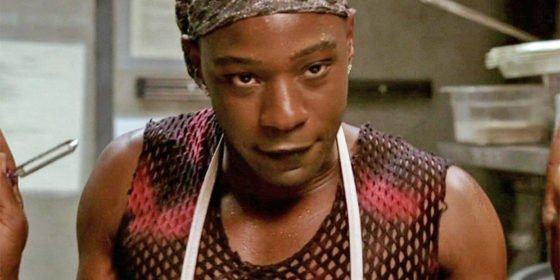 The family of actor Nelsan Ellis have released a statement concerning the cause of his death.

The actor passed away over the weekend. Ellis rose to fame on cult HBO drama New Blood. He played iconic gay character Lafayette Reynolds from 2008 until the series’ end in 2014. Ellis also appeared in the films The Butler and Get On Up.

He died on Saturday in Los Angeles, aged 39. Initial reports put his death down to complications from heart failure.

His family gave a statement to the Hollywood Reporter in which they said his heart failure had been triggered by alcohol withdrawal syndrome.

They said they wanted to be open about Ellis’ struggles with drug and alcohol addiction as it might help others.

‘Nelsan was a gentle, generous and kind soul’

‘Nelsan’s father has bravely agreed for me to share the circumstances of Nelsan’s heart failure.

‘Nelsan has suffered with drug and alcohol abuse for years. After many stints in rehab, Nelsan attempted to withdraw from alcohol on his own. According to his father, during his withdrawal from alcohol he had a blood infection, his kidneys shut down, his liver was swollen, his blood pressure plummeted, and his dear sweet heart raced out of control.

‘On the morning of Saturday July 8th, after four days in Woodhull Hospital, Nelsan was pronounced dead.

‘Nelsan was a gentle, generous and kind soul. He was a father, a son, a grandson, a brother, a nephew, and a great friend to those that were lucky enough to know him. Nelsan was ashamed of his addiction and thus was reluctant to talk about it during his life.

‘His family, however, believes that in death he would want his life to serve as a cautionary tale in an attempt to help others.’

Among those to mourn his loss was True Blood creator Alan Ball, who said ‘Nelsan was a singular talent whose creativity never ceased to amaze me. Working with him was a privilege.’

Are you struggling with alcohol?

‘Anyone with a serious dependency on alcohol should never consider going “cold turkey” at home,’ a spokesperson for British charity Addaction told GSN.

‘When a heavy drinker stops drinking alcohol completely, the body becomes flooded with high levels of chemicals that had been previously suppressed. This can lead to severe complications including dehydration, vomiting, abnormal heart rhythms and a condition called delirium tremens (DTs) characterized by confusion, delirium and seizures.

‘Unattended, people can suffer head injuries, lethal dehydration, heart attacks or strokes and can choke on their own vomit.

‘If you’re struggling with an alcohol addiction, get in contact with your local alcohol service. At Addaction, we work with people to detox gradually, reducing alcohol use over time.

‘These programmes are supported by medication and a therapeutic programme of recovery as necessary to make sure people reduce their drinking and eventually quit safely and sustainably.’

‘Many others use drugs and alcohol to medicate some personal trauma, depression, anxiety or other mental health issues,’ says David Stuart, manager of the Dean Street Wellbeing programme and ChemSex support services at 56 Dean Street, the London sexual health and HIV clinic.

‘In these cases, the use can accelerate quickly to “dependent” use; using every day.

‘Some drugs in particular, like alcohol, heroin and GHB/GBL, can be incredibly dangerous when used dependently/every day. If a person using these drugs dependently for a period of time was to stop suddenly, they are likely to experience some very dangerous withdrawal symptoms.

‘If you are using any of these drugs every day, and were considering stopping, it would be very unwise to attempt it without professional advice, and in some cases prescribed medication.

‘Nelsan Ellis’ death is a devastating reminder of how vulnerable we can all be to commonly used drugs and alcohol; and a reminder that the stigma associated with mental health or drug use can actually prevent us from seeking help.’

Need support? Call one of these helplines for further advice.