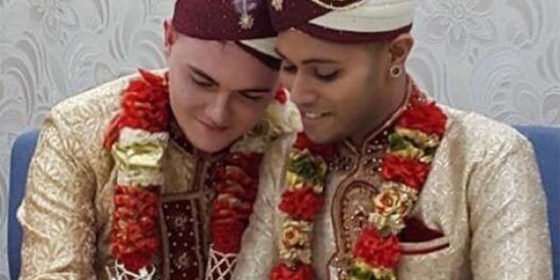 Two men have become the first in the UK to have a gay Muslim wedding, it has been reported.

While they got a civil ceremony, they wanted to dress in ‘traditional’ garb to show the world you can be gay, you can be Muslim, and you can be in love.

Choudhury has faced a huge amount of homophobia to get to this point, having been bullied in his school years and isolated from his family.

‘People would spit on me, empty the rubbish bins on me, call me pig and the Muslim people would shout “harum” – which is a very nasty insult in my language,’ he said.

In his teens, he was assaulted in the street. His local mosque banned him from attending, and was repeatedly told his sexuality was ‘just a phase’.

After attempting to take his own life, he met Rogan and everything changed.

‘I was crying on a bench and Sean came over and asked if I was okay. He gave me hope at one of my lowest points and he’s stood by me all the way,’ Choudhury told the Express and Star.

The pair moved in together in 2015 shortly after meeting and Choudhury proposed to Rogan on his birthday last June.

The couple, who married on 22 June, went on their honeymoon in Spain. And while many of Choudhury’s family did not attend the wedding, believing he is still ‘sick’, he couldn’t be happier.

‘I am happy,’ he told Huffpost UK, saying his mother has come around to being supportive.

GSN attempted to verify whether this was the first gay Muslim wedding. The Office of National Statistics said the religion of spouses is not routinely recorded at civil ceremonies.

The Muslim Council of Britain, like the Church of England, remains opposed to same-sex couples marrying in their mosques.

But while faith leaders may not appreciate Choudhury and Rogan’s marriage, it’s clear there is one happy couple that has a bright future ahead of them.