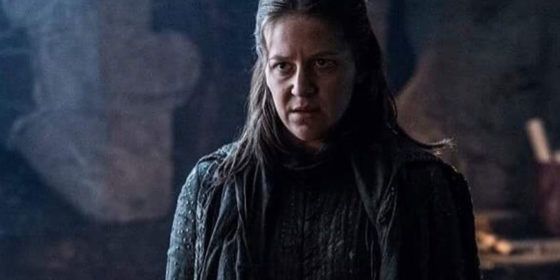 Game of Thrones actress Gemma Whelan, who plays Yara Greyjoy, has opened up about her same-sex kiss.

In the most recent episode of the hit television show, Yara sails to Dorne with Ellaria Sand (Indira Varma).

On the journey, the two share a romantic scene together. As Ellaria reaches towards Yara’s crotch, she warns to prepare for ‘a foreign invasion.’

On that scene, Whelan told NBC Out: ‘I think a lot of people have made the joke ‘Oh, you were just about to get some! Terrible timing.’

The scene was also completely improvized, she revealed.

On her character’s sexuality, she said: ‘I don’t think she’s one way or another.

‘As she’s said before, you know, she’s not fussy — she’s up for anything,’ she said.

On getting into character, Whelan said: ‘I couldn’t be Yara in my civil clothes, you know.

‘I think when you put on those big thigh-high boots and the leather trousers and the armor, it’s quite difficult not to feel quite full of yourself,’ she said.

Fans also took to Twitter to express their delight at the bisexual storyline.

Fans will just have to wait to see how Yara’s relationship with Ellaria progresses but Whelan says anything could happen.

She’s ‘very open minded’ and up for ‘whatever the script writers decide to do with her.’