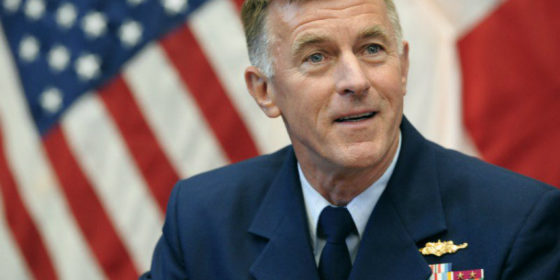 Joining the throngs of critics to Donald Trump’s proposed transgender military ban is the US Coast Guard.

This support comes the same day as a Reuters poll revealing a majority of Americans support transgender people in the military.

‘The first thing we did [after Trump’s announcement] is we reached out to all 13 members of the Coast Guard who have come out under a policy who declared themselves transgender,’ Zukunft said in his statement. ‘I reached out personally to Lt. Taylor Miller, who was featured on the cover of the Washington Post last week. If you read that story, Taylor’s family has disowned her. Her family is the United States Coast Guard.’

Miller is a 27-year-old Coast Member service member and a trans woman. In the Washington Post’s feature, Miller confided: ‘I feel very unwanted [after news of the ban]. Mortified and embarrassed.

‘Last month, I helped my unit as it rolled out a training policy for transgender services,’ she said. ‘And here we are, less than a month later. Yeah, all of a sudden, I feel like I’m eating my words.’

He further revealed the Coast Guard has assembled a team of military JAG lawyers on the issue.

This development aligns the Coast Guard with other US military branches, including the Army and Navy. Those branches doubled down, saying all service members should ‘be treated with dignity and respect’.

As of now, the Joint Chiefs of Staff released a letter stating there will be no policy change until further guidance.