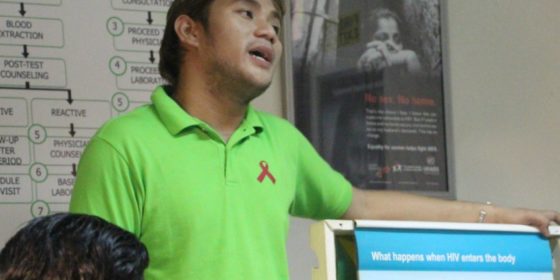 The United Nations and doctors are calling on the Philippines to treat rising HIV rates as a ‘national emergency’.

A UNAIDS Report revealed the Philippines has the fastest growing HIV epidemic in the Asia Pacific region.

‘The Philippines has a small window of opportunity to act now and stop a major HIV epidemic from taking hold,’ said Eamonn Murphy, Director of UNAIDS Regional Support Team for Asia-Pacific.

‘If HIV programming is re-directed to focus on the people most at risk and where they are located, I’m sure the country can not only return to a stable situation but even end the AIDS epidemic as a public health threat by 2030.’

While the Philippines has controlled the HIV epidemic among female sex workers, the country noted a shift in the epidemic in 2007.

The majority of the new infections were among 15 to 24 year old MSM and TGW. The Department of Health estimated that in less than 10 years more than 90% of people living with HIV will be under 30.

UNAIDS said the Philippines government had refocused its strategy on cities were 80% of the new cases were reported. It has opened HIV clinics which serve as ‘one-stop shops’ in testing, counselling and treatment services.

‘HIV is one of the top health priorities for the government of the Philippines,’ said Dr. Paulyn Jean Rosell-Ubial, the Secretary of the Department of Health.

‘We have significantly increased the budget allocated to HIV in the past few years, and are now implementing programs which we expect to have a positive impact.

‘The Department of Health… is determined and committed to halt the increase in the number of cases and start reversing the trend of the epidemic in five years.’

Dr Rossana Ditangco is the head of the AIDS Research Group of the Research Institute for Tropical Medicine (RITM).

Ditangco told Rappler it was time for ‘an aggressive campaign’ to deal with the HIV crisis.

‘I don’t have high hopes anymore. We can’t control the rapid rise of HIV infection,’ she said.

‘It is time the government has to treat HIV as a national emergency.’

Late last month a PrEP (pre-exposure prophylaxis) trial was launched. It will make the HIV preventative drug available to 200 MSM and TGW.

Rather than the government running the trial it will be run by community health organization, LoveYourself.

The trial will run for two years to determine if it is fit for a wider community roll out.

‘Part of the reason for a CBO (community based organization) roll out is to make it community driven rather than government policy,’ LoveYourself’s community relations manager told Gay Star News.

‘We hope this strategy will be effective in reaching out to more sectors of the key affected population.

‘The Philippines Health department has long been supportive of this initiative and we think this is the perfect time to distribute it in the country.

‘The pilot program study is not meant to check the effectiveness of drug but more on adherence of participants. Results of study will give us a snapshot on behavior of Filipino Men towards PrEP.’