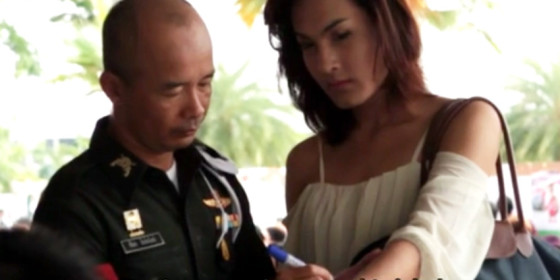 A law that would allow Thai people to easily confirm their true gender on official documents is gaining popularity.

The proposed law would make it easy for Thai people to update their gender officially. That includes on documentation such as, birth certificates and passports.

It would even affect conscription laws because currently men are required to complete military service. Even trans women are forced to serve if they have not been able to affirm their new gender on official records.

The law change was recommended after joint research from the Thammasat University’s Faculty of Law and the Faculty of Social Administration.

The research looked LGBTI issues from 14 countries and researchers were then able to make recommendations from their findings.

‘The current act is not a magic potion that will cure everything,’ Matalak Orungrote, an associate professor at the Faculty of Law, Thammasat University told the Bangkok Post.

‘But if we make a law that will certify a person’s gender, it would support many pre-existing laws.

Thailand has a proposed Gender Certification Act in the works which it claims will strengthen protections for LGBTI people. The government wants to set up a national committee that would promote LGBTI issues.

The national committee would also have the power to ‘certify’ gender.

If a person would like to have their gender updated on their documentation they would need to be at least 20 years old.

Advocates argued that such a committee is unnecessary and only recognized three genders, male, female and trans.

Matalak said the researchers work could help to minimize any shortcomings of the Act if the government took on their recommendations. She also warned the proposed committee might not be overarching enough.

‘The committee has limitations,’ she said.

‘They must be able to connect discrimination cases to hate crimes, which have more severe penalties compared to regular crimes.’

In 2013, the Ministry of Justice introduced a gay rights bill but its progress stalled because advocates said it did not do enough for trans people and couples.

The recent win for marriage equality in Taiwan prompted Thai advocates to pressure the government to resurrect the bill.

A 2015 Gender Equality Bill was designed to protect LGBTI people from discrimination. But Matalak said it was not enough.

‘The Thai Gender Equality Act 2015 is not a one-stop solution to provide equal rights for the LGBT community,’ she said.

‘The current act is not a magic potion that will cure everything.’