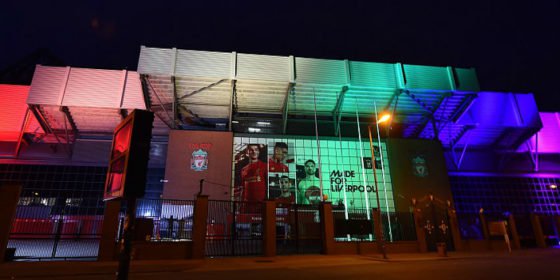 Liverpool Pride are to shine a light on diversity with their pride project Come Out of The Shadows by lighting up the city in the colors of the Pride flag.

Organizers are appealing for owners of Liverpool’s most iconic buildings, businesses and buildings to light up with a rainbow to make the northern English city the most ‘visibly LGBT+ city in the UK’.

Come Out of The Shadows will also feature a public exhibition that will promote and showcase each individual community within the LGBTI community, as well as promoting the Straight Ally flag.

Many of Liverpool’s most famous and recognizable buildings have already pledged their support to the initiative including St George’s Hall, Liverpool Central Library, the Everyman theatre, FACT, Royal Court Liverpool, World Museum Liverpool, ECHO Arena, Merseyside Police Headquarters, Liverpool John Lennon Airport, James Street Station and Barclays Bank. Liverpool Football Club will be also be joining again, after lighting up the Kop (One of the stands in Liverpool Football club’s stadium) in 2016.

Last year, ‘Come Out of The Shadows’ were joined by more than 30 buildings across the city illuminating themselves.

Liverpool Pride’s Michael Carey said ‘Come Out of the Shadows is about highlighting the city region as one that is tolerant and visibly LGBT+ friendly. We believe that discrimination in any form is unacceptable and created this lighting strategy to celebrate equality and diversity. Liverpool Pride invites all building owners, venues and businesses across the City region to contact us, pledge your support and help us to shine even brighter!’

This year, Liverpool Pride’s theme is International Love – which lends a happy hand to the city’s 50 Summer’s of Love festival, celebrating 50 years since the partial decriminalization of gay sex.