A fashion designer has paid tribute to Manchester bombing victim Martyn Hett with his very own t-shirt.

Martyn Hett was confirmed dead by his ex-boyfriend after being killed in the bombing of an Ariana Grande concert.

The 29-year-old had been popular on social media for his love of Coronation Street and Pop Idol winner Michelle McManus.

More than £3,000 has already been raised from the GoFundMe campaign, with donations going to a charity of the bereaved family’s choice.

Designer Normal said: “Following a cry from social media that we produce Holly’s illustration as a t-shirt, and we thought it would be a fitting tribute to offer this design, with all profit going to Martyn’s family, or a charity, organisation or project of their choice.

“Martin brought so much joy to people’s lives in such a short amount of time, and he will never be forgotten.

“Through this t-shirt we would like to create something positive in the face of such tragic events.

“This T-Shirt is produced with permission from Martyn’s family.”

The t-shirt is available on GoFundMe for £25, with £20 being donated to the family. 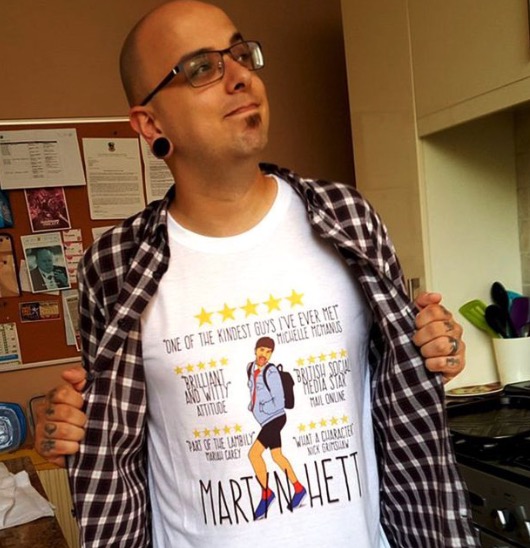 RELATED: Queen brings Buckingham Palace to silence as she pays tribute to victims of the Manchester bombing.

She wrote on Instagram that she felt “devastated” by the news.

Mariah said: “Devastated to learn that one of the victims in Manchester was part of the #Lambily.

“RIP Martyn Hett. We will cherish your memory forever.

“His family and all the families affected are in my thoughts and prayers. MC 💔❤”

He had been due to board a flight to the US the morning after the concert to attend a meet-up of Mariah super fans.

Days ago he shared a photo of his leaving party ahead of his new adventure, where he had tickets to attend the Wendy Williams show and join the meet-up of Mariah fans.

Martyn had a strong following on social media, becoming well-known for his love of soap opera Coronation Street, as well as Mariah Carey.

He was also a former winner of cookery show Come Dine With Me, which he competed in with his the former boyfriend who confirmed his death.

You can buy the Martyn Hett t-shirt from here.