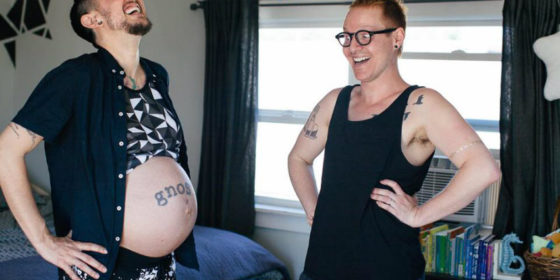 Two days later, the couple, who has been together for seven years, posted on their Facebook page they were going home.

‘WE ARE HEADING HOME!!! Leo has received a clean bill of health (and so has Trystan) so we are happily heading back home to settle into our new life with our newest little addition.

Reese and Chaplow documented the pregnancy on their Facebook page. In January, they posted a video announcing the addition to their family.

Two months later, Reese appeared in a new video discussing his decision to carry the child as a transgender man. He explains taking hormones was enough for him and that he never felt the profound discomfort in his body.

‘I never wanted to change my body,’ Reese says in the video. ‘I never felt like I needed to change my body. … It starts to make more sense that it would not seem totally bizarre for me to want to create and carry a baby. Because I don’t wish that my body was not a trans body. I’m okay being a man who has a uterus and has the capacity and capability of carrying a baby.’

In June, Reese told CNN he stopped taking testosterone to prepare for the birth. He was also under medical supervision the whole time.

The couple has faced criticism for their decision. ‘We find that behind the shroud of anonymity, people feel pretty empowered to tell us what should happen to us, to our children, to our family,’ Reese stated. ‘The reason why you have a kid is because you want to see more love in the world, and remembering how difficult that’s going to be, it’s hard.’

Looking at their Facebook, however, the couple is focused on being a happy family. Along with Leo, Reese and Chaplow adopted Chaplow’s niece and nephew in 2011.