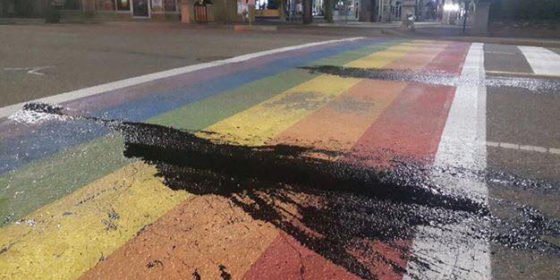 Two road crossings in Lethbridge, Alberta painted in the rainbow and trans flag colors last week are believed to have been vandalised Wednesday night.

This is the second time in three days that the crosswalks had been targetted. Skid marks, tar and horse manure had been used in the defacement.

Levi Cox, the chairman of last year’s Lethbridge Pride said on Facebook: ‘I was sad, I was like, is this where we’re really at?’

A clean up crew has been working to restore the crosswalks back to how they looked.

The trans flag crosswalk is the first one to be painted in the world. The city has approved the support of the citizens and Lethbridge Pride Fest to make the crossings permanent.

One week after they were first painted, the crossings were vandalised with tyre skid marks on 12 June.

Organizers of Lethbridge Pride Fest on Facebook said: ‘These marks are blatantly deliberate and nearly identical incident in Saskatoon earlier this month. This is a direct attack on the LGBTQ+ community and specifically the Transgender community.’

Police are currently investigating but currently have no leads.

Lethbridge Pride Fest will begin on 16 June and culminate with a parade on 24 June.

Cox also said: ‘Thank you for helping us express our message of celebration, inclusion and love. We will have our biggest parade and coming together ever.’