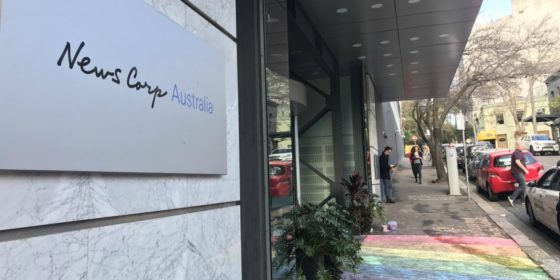 Members of the LGBTI community converged on the offices of a Sydney newspaper. They were mad the newspaper had lumped same-sex attracted young people in with other serious health issues.

Rupert Murdoch’s News Corp owns The Daily Telegraph which came under fire yesterday. It published statistics about secondary students who identify as same-sex attracted in a story about health issues. The story’s headline read ‘Fat chance of being healthy’.

The Daily Telegraph did publish an explanation on Facebook amid the community’s anger.

But it was not enough for about 100 people who turned up at News Corp’s Sydney office to protest the homophobic story and demand an apology.

It is understood the snap protest was organized yesterday afternoon by a group from the Young Greens, Community Action Against Homophobia and DIY Rainbow.

‘What’s important is that we don’t let this kind of homophobia and vile bullying of young go unresponded to.’

The Australian Greens MP said she expected the conservative media to attack her because politicians were fair game. But it was unacceptable to print something so harmful.

‘What we know is that the reaction to this is that it has caused harm to young people,’ she told Gay Star News.

‘Their excuse is… unacceptable. It’s crucial they apologise.

‘People in the community need to know the can not get away this kind of bullying.’

Nobody from News Corp came out to address the protestors but many staff were going in and out of the building during their lunchtime. Many of the News Corp staff seemed pleased the protestors were making their point, according to Leong.

Were the numbers right?

The controversial graphic claimed 16.8% of Australian secondary students identified as same-sex attracted. Social demographer Mark McCrindle told the newspaper that number was much higher than any other age group.

The Daily Telegraph got that number from the NSW Government’s Youth Health Framework from 2014 – 2017.

But a leading academic on youth sexuality who completed the research that lead to the above statistic said those numbers might not be fully accurate.

‘To that 16.8%, that number is pulled directly from the 2013 National Survey of Secondary Students and Sexual Health report,’ said Dr Christopher Fisher, Associate Professor and Principal Research Fellow at Latrobe University’s Australian Research Centre for Sex, Health and Society (ARCHS).

‘But there is a context around that number is often missed. The 16.8% comes from a convenience sample which means it’s not representative of all secondary students in Australia.’

The survey also spoke to students from Grade 10, 11 and 12  and had an overrepresentation of LGBTI students.

Fisher said the rate of same-sex attraction across most age groups falls around 3-4%.

The numbers of people identifying as same-sex attracted 20 years ago were considerably lower. That is because at the time people may have been more afraid to declare it. Fisher said that was another reason why the statistics were higher.

‘So while we are seeing an increase in the absolute numbers of people who are identifying this way – across all age groups, not just younger people – doesn’t necessarily mean that the absolute number of individuals in the world has really changed that so much,’ he said.

Asking people if they were same-sex attracted as opposed to if they identified as one of the LGBTI identities would also yield different results.

‘Over the years we’ve asked them (students) about their sexual attraction which is very different to their behaviour,’ Fisher said.

‘There is a difference between attraction behaviour and identity.’

Why are people so angry?

Micah Scott is the CEO of Minus18 a youth organization for LGBTI people. He explained why the LGBTI community was so mad about The Daily Telegraph’s story.

‘The first is pretty obvious and being called by the LGBTI community, that The Daily Tele suggested that become same-sex attracted is a health hazard.

‘Which is pretty disgusting and it’s articles like this that make LGBTI young people feel like there’s something wrong with them.’