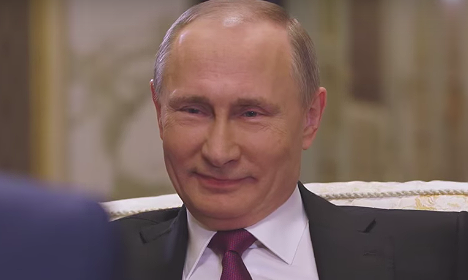 Vladimir Putin has claimed in an interview he feels it is his duty to stop gay people from getting married because they ‘will not produce any children’.

In a series of interviews with US film director Oliver Stone, the Russian president also explained he does not support same-sex adoption either. This is because ‘children will have a freer choice when they become adults if they grow up in a traditional family.’

He explained the reasoning behind his anti-LGBTI beliefs by claiming: ‘As head of state today, I believe it’s my duty to uphold traditional values and family values. Why? Because same-sex marriages will not produce any children.

‘God has decided, and we have to care about birth rates in our country. We have to reinforce families.’

As in my view, children will have a freer choice when they become adults if they grow up in a traditional family.’

‘They even get state awards’

Despite these claims, Putin goes on to say that the country is ‘rather liberal’ and ‘there is no situation like in some Muslim countries where homosexuals face death penalty.

‘We have no restrictions or harassment based on gender. Moreover, many people explicitly talk about their non-traditional sexual orientation.

‘We maintain relations with them and many of them achieve outstanding results in their activity… they even get state awards and orders for their achievements.’

The series aired earlier this week, containing interviews filmed between 2015 and 2017.