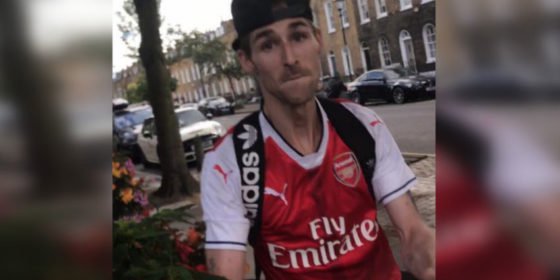 Shocking video footage shows the moment a woman hurled homophobic abuse at a gay man, while another man lunged at and punched him.

Barrie Griffith, freelance make-up artist from Liverpool, posted the video to Facebook, calling for any information on the man who attacked him.

In the video, Griffith films as an agitated woman calls his boyfriend a ‘batty man’ and then calls Griffith a ‘fucking poof’.

She adds: ‘No one cares about you or anyone around you.’

At this point, an unidentified man comes out of a restaurant and lunges at Griffith.

He wrote: ‘So today I was a victim of homophobic attack by this guy who punched me in the face.

‘If you know him all see him please contact the police.

‘He attacked me and my boyfriend but he picked on the wrong gay.

‘I never experienced something like this, please name and shame this man and his girlfriend. If you see him or know him, please post and share,’ he said.

In a later video, Griffith films the woman yelling more abuse at the gay couple.

She says: ‘I don’t like poofs, now fuck off.

‘I’m homophobic, if you really must know,’ she admits. ‘I can’t stand gays and I can’t stand lesbians so now fuck off away from this doorstep.’

Gay Star News reached out to Liverpool police, but they were unable to provide a comment by time of publishing.