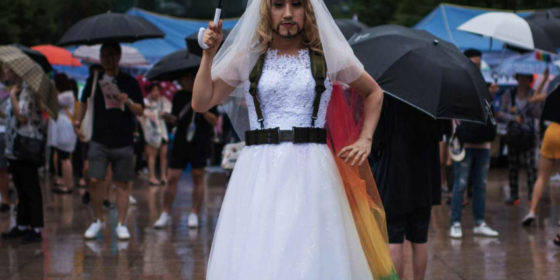 The South Korean Supreme Court made an important step forward for LGBTI rights on Friday (4 August). In a new ruling, they ordered the government to allow the Beyond the Rainbow Foundation to legally register as a charity.

The ruling comes the same day as the news that the South Korean government is going to review its ban on gay soldiers in the military.

The foundation is one of the country’s biggest resources of support for the LGBTI community. They advocate for people’s rights, documents discrimination, and generally tries to make society a better place for the community. They have attempted to gain this legal recognition for three years, each time getting turned down by various government agencies.

As Beyond the Rainbow is not a governmental agency, they are required to register with the most relevant agency. However, the agencies they applied to continually pushed back.

In 2014, the Seoul Metropolitan Government rejected the foundation, followed by the National Human Rights Commission. The following year, the Ministry of Justice formally rejected the group in April 2015.

The Ministry explained their rejection in the following statement: ‘The Ministry of Justice develops, oversees, and revises policies related to all human rights issues in South Korea and is responsible for allowing organizations that advocate human rights to become incorporated. Since your foundation’s main objective is promoting human rights for a social minority, it is different in nature from the organizations that the ministry allows to incorporate. As such, we may not grant your foundation permission to incorporate.’

‘This judgment is a victory for the fundamental rights of all South Koreans,’ said Graeme Reid, director of the lesbian, gay, bisexual, and transgender rights program at Human Rights Watch (HRW). ‘And a boost to the LGBT community’s ability to organize and advocate.’

In HRW’s assessment, this decision gives the group the ‘ability to receive tax-deductible donations and operate in full compliance with the law’.

‘It should never have been necessary for an LGBT group to lobby to find a government agency to consider their application for registration,’ Reid continued. ‘The Beyond the Rainbow Foundation has been put through a three-year long game of political ping-pong and it is past time to let them do their important work.

‘This judgment should signal to all agencies across the South Korean government that LGBT Koreans’ basic rights should be protected like everyone else’s,’ he finished.