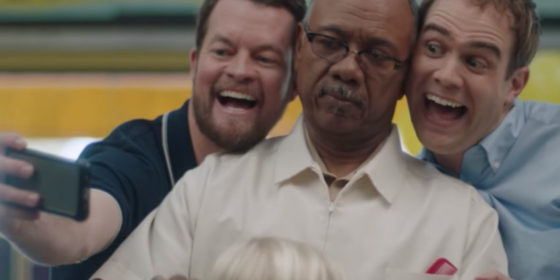 Luvs has an adorable and funny new ad out for their diapers — featuring a haircut and gay dads.

As with any new parents, every first for your child is A Big Deal. That’s definitely how it is for the dads in this cute clip, which you can watch below.

It’s their child’s first haircut and the loving fathers are concerned about getting it just right. Not to mention, documenting every moment of the process for posterity.

But, of course, things change after the first kid. Or at least, that’s the clever joke the ad posits.

The video may be short and sweet, but it’s part of an important growing trend. Between Coke’s pool boy ad earlier this year, Hallmark’s Valentine’s commercial featuring a gay couple, an Allstate ad showcasing gay dads, and Wells Fargo standing by its lesbian couple commercial, this is the latest in businesses reflecting the true nature of society.

It’s a simple but effective and important way to increase visibility and support for the LGBTI community. Not to mention it’s just so gosh darn cute and charming!