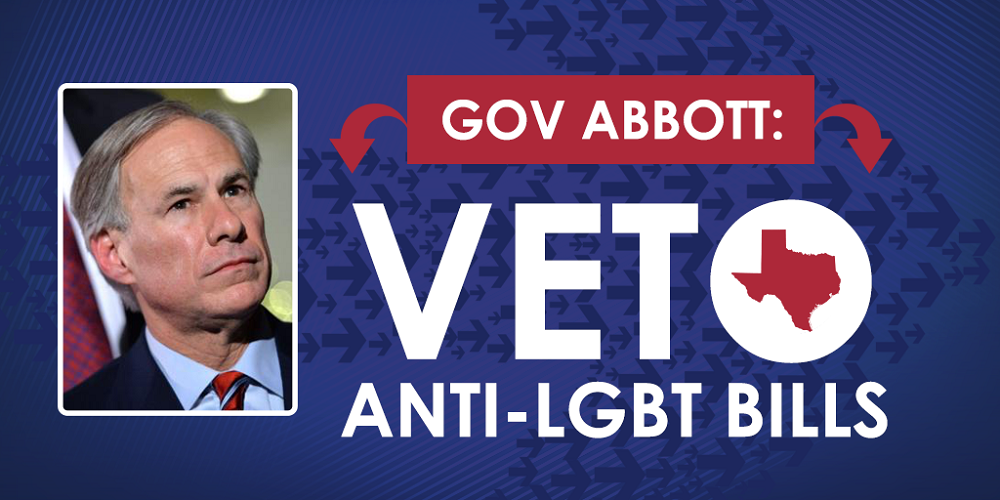 Over the weekend a group of Texas legislators pushed through two discriminatory efforts that, if signed by the Governor, could impact the economy of the state and cause harm to LGBTQ people and their families. In a cynical move, because anti-LGBTQ discrimination is widely unpopular, politicians took action last Sunday night, when they thought fewer people would be watching.

If signed by the governor, these laws would have a negative impact on many children in Texas. One of the bills permits discrimination against LGBTQ and other prospective foster and adoptive parents and allows youth in foster care to be subjected to the discredited practice of anti-LGBTQ conversion “therapy.” The second policy, written as an amendment to another bill, targets transgender students for discrimination and stigmatization.

Fran Hutchins, Deputy Director of Equality Federation said, “It’s heartbreaking to see adult politicians targeting children and families, leaving them vulnerable for discrimination. These actions are out of step with the values of fairness and opportunity that Texans and Americans hold dear.”

For the past few months hundreds of LGBTQ people and their families and friends, led by Equality Federation member Equality Texas, have rallied at the State House and shared their stories to try to stop these discriminatory bills.

“No amount of discrimination is acceptable. There is no middle ground. All discrimination is bad, full stop. Targeting some of the most vulnerable children in our state is abhorrent, shameful, and disgraceful. The Texas lawmakers of the 85th legislative session are on the wrong side of history. No matter how upset or scared our LGBTQ friends and families are feeling Equality Texas wants you to know that we stand with you; and we will fight to protect you,” said Chuck Smith, Chief Executive Officer of Equality Texas.

Follow the these and other pieces of legislation at equalityfederation.org/lac and equalitytexas.org.