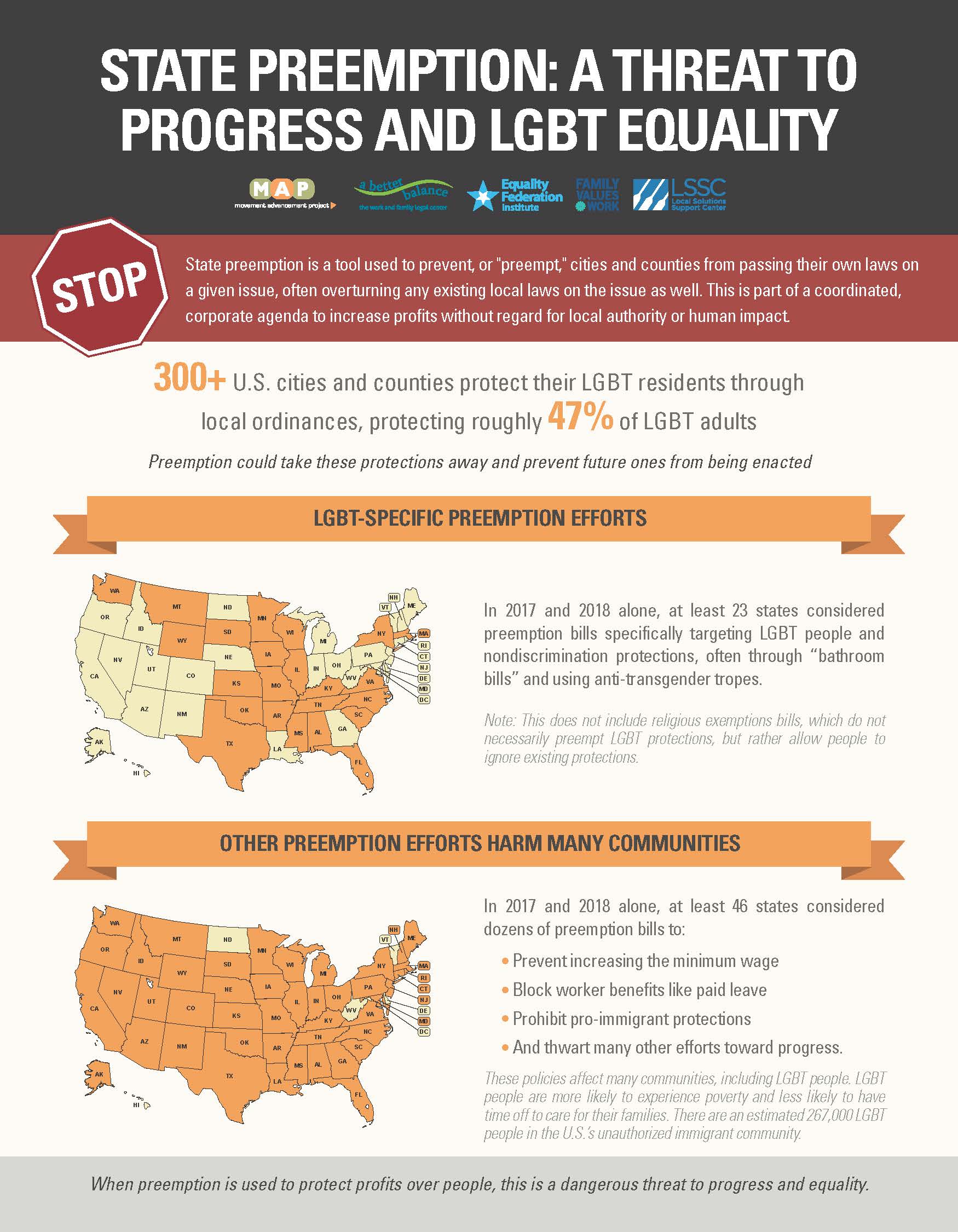 In 2016 we published a blog post on the growing threat – the use of preemption legislation. Today, we’re proud to participate in the release of a new report led by Movement Advancement Project in partnership with  A Better Balance, Family Values @ Work, and the Local Solutions Support Center.

NEW REPORT: State Preemption and the Threat to Progress and Equality

North Carolina’s HB2 was a terrible bill for many reasons. Not only did it ban transgender people from accessing restrooms, it also prevented local cities from (1) protecting their residents from discrimination and (2) from raising the local minimum wage. How?

The state legislature reversed a local law protecting LGBTQ people and prevented any other city in the state from protecting LGBTQ people or raising the minimum wage, through a tactic called “preemption.” This tactic is part of an increasingly common strategy by state legislatures throughout the country to limit local progress on a wide range of issues, from the minimum wage and paid leave to pro-immigrant policies and LGBTQ-inclusive nondiscrimination ordinances. Although the reasoning behind current state preemption efforts can vary, the impact remains the same: tying the hands of local lawmakers and preventing them from providing the protections they know match their residents’ values and are needed in their communities.

The Power of State Preemption: Preventing Progress and Threatening Equality, shows the spread and impact of these efforts, both across the country and across a wide range of issues including LGBTQ equality. This report was developed in partnership with A Better Balance, Equality Federation, Family Values @ Work, and the Local Solutions Support Center.

However, state preemption isn’t only an LGBTQ issue. More than 20 states have preemption laws that prevent cities from increasing their local minimum wage or from guaranteeing local workers paid sick leave. Nine states forbid cities from passing sanctuary city ordinances or taking other similar measures to protect their immigrant residents–and in 2017 alone, 33 more states considered similar bills preventing pro-immigrant policies. When preemption is used in this way–to set a maximum rather than minimum level of protections–there are drastic consequences for cities and states alike, including: