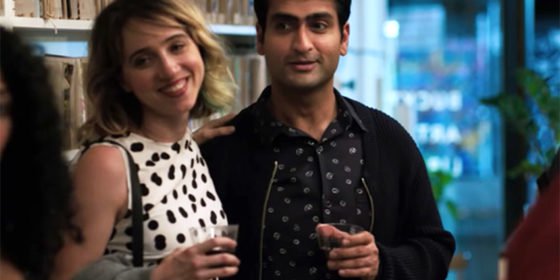 The Big Sick is being praised as one of the best romantic comedies out this year, noted for its realistic take on romance and relationships.

Inspired by couple Kumail Nanjiani and Emily V Gordon, the film follows the interracial couple dealing with their cultural differences and what happened when Emily is in an eight-day coma.

It is found Emily is suffering from a rare condition called adult-onset Still’s disease. Kumail, a stand-up comic, had been due to go on tour. But instead, he kept vigil at Emily’s bedside with her parents who had flown in from North Carolina.

Emily, played by Zoe Kazan in the Judd Apatow-produced film, has revealed how the original script it featured RuPaul’s Drag Race.

‘At one point in The Big Sick script, Emily shows Kumail RuPaul’s Drag Race and it’s a running convo between them. Cut for length, still in my heart,’ she said on Twitter.

‘…and I think Kumail transforms Emily’s hospital gown into a gown? It’s all part of my attempts to write RuPaul into everything I do.’

Gordon noted that working with Gordon and co-producer Barry Mendel meant there were many options to choose from when creating the comedy.

‘I should reiterate that these scenes were written, not shot,’ she said. ‘When you write with Barry and Judd, you experiment a lot. A lot.’

The Big Sick is out in select cinemas now.