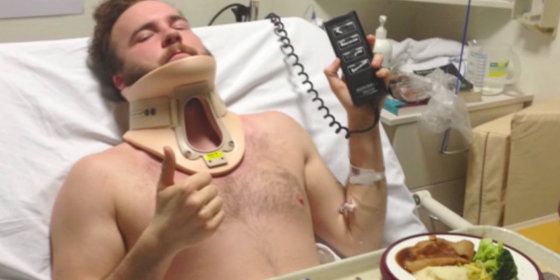 Four years ago, Brad Guy’s parachute and the backup both failed and yet he survived.

Now he’s opened up about the struggle he’s faced with his mental health following the accident.

The failure of both parachutes meant he free falled from 15,000 feet going 80km/h.

Guy has spoken about how he just assumed that after recovering physically, everything would be back to normal.

In the years following the accident however, Guy has suffered with depression and post-traumatic stress disorder.

Brad asked ‘Are we going to die?’

The skydiving experience had been booked using a voucher that he’d received for his 21st birthday.

Guy describes the normal jolt you experience when sky diving was worse than normal. This was when the instructor he was tandem with started swearing.

The instructor had done over 2000 tandem dives previously so Guy leaned on him for support.

Guy wants there to be more discussion around the impact of mental health on people’s lives. When his depression was it its worst, Guy considered taking his own life.

In the video, he gets teary when talking about the moment on landing in a golf course and his family running to him. He recalls his mother repeatedly telling him that he was going to be okay, but all he could say in response at the time was ‘I’m sorry’.

Watch the shocking footage in Brad Guy’s video below: