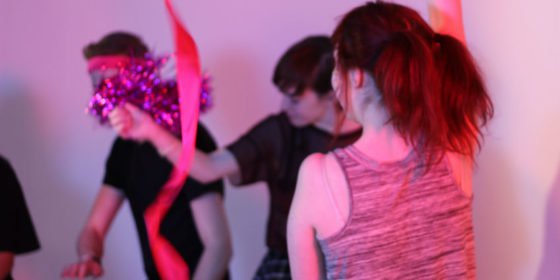 I preach to everyone how important I believe a community is to have.

Despite now being known as a loud and proud bisexual activist, I wasn’t always active within the LGBTI community.

I had friends in high school who were LGBTI, but they weren’t very open about their sexualities.

When I came to university, I’d always told myself that I would join the LGBTI Society and finally join a community I longed to be part of. I wanted to have a safe space to explore and understand my sexuality more.

However, after settling into a friendship group of straight people, I didn’t have the confidence to approach their stand at Freshers’ Fair alone. I wanted to fit in, and being bisexual meant the opposite of that.

And so, for the first year of university, I still spent all my time brushing that side of me under the rug as much as possible.

Eventually, at the start of my second year, I found the confidence to approach the stand for the LGBTI society, take my ‘gay card’ and sign up. It was a massive relief.

I was already nervous before attending my first meeting about not knowing anyone.

Upon arrival, my worst nightmare came true. Everyone was already sat in their cliques around a big table. A table at which there was no more space. The one person I did know there was too busy circling and talking to people he already knew.

It was honestly awful. The only highlight of the meetings was they were hosted in a cafe that did an amazing variety of cakes.

From the moment of arrival every week, I looked forward to leaving. Yet, I still went, just hoping it’d improve.

I stuck it out until Christmas, and then just didn’t go back after that. I didn’t feel welcomed at all and I was incredibly disheartened. All I’d wanted was a group of people to be able to talk to that understood my problems, where I felt like I had a family.

After briefly working with National Student Pride through my university radio station, I’d seen they were recruiting and decided to give it a go… And that’s when I finally found my community.

It felt so freeing. That’s the only word I can think of.

Finally, there was a group of people who would listen to my rants about bisexual erasure or biphobia without judging, complaining or laughing. They listened and empathized.

Finally, I found a group of people who were as loud and lively and obsessed with RuPaul’s Drag Race as I was.

It was nerve-wrecking at first, of course. That all-too-often worry for bisexuals that I wasn’t ‘gay’ enough loomed constantly, but no one has ever done or said anything to add to that worry.

And a year later, my community are as there for me as ever. I feel comfortable talking to them about everything in my life, from my sexuality to my mental health issues.

It had taken time for me to find ‘my people’ but the wait was so worth it.

Subconsciously, I slightly always feel like I have to reign in my bisexual side around most of my straight friends. Maybe it’s the heteronormative society we live in that has pressured me to feel like that.

Now I finally have a group of people I can be 110% myself around and I couldn’t be more grateful for it.

In a time when Trump, Tories and the DUP, the LGBTI community need each other more than ever. Who else is going to understand your sadness and worries more, than each other?

There are some problems that my straight friends just would not get, no matter in how much detail explain. That’s where my community comes in. They truly understand how it feels to have family or complete strangers make homophobic comments. I couldn’t appreciate that more.

I’d push every LGBTI person to find their community! They’re the best support network and friends you could ever ask for.

My trans brother goes to university this year. I’ve reminded him constantly to make sure that he give their LGBTI society a try. It’ll give me peace of mind knowing that he has people who will understand and support his transition.

It’s Pride month, so take a moment to appreciate the community. We’re lucky enough here in the UK to be able to go to school, university, or work and have LGBTI networks. Some people would give anything to have people who understood.

There’s no feeling like have a network of people who are there for you through everything. They’re a safe place.