Leanne Harper is a white performance artist who applies dark makeup to her face in order to look more like Beyonce.

Harper’s act, Beeyonce, has been promoted on official flyers for the Pride event and on social media as one of the main performance acts.

Many on social media have expressed anger on Durham Pride’s Facebook event page. Harper replied defensively to the criticism. 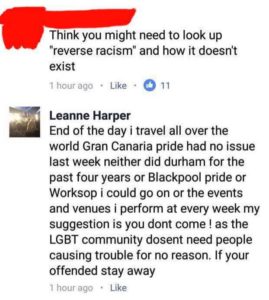 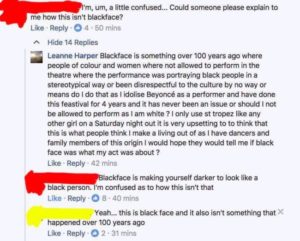 Durham Pride defended their decision on Twitter by claiming they’re working with an ‘anti-racist’ charity that does not consider the act to be blackface. This Tweet only caused the festival to face even more backlash:

As @Durham_Pride are being slow to answer. Who knows the “anti racist” charity that is telling ppl a white woman in blackface is okay? pic.twitter.com/cBtfyxFRAJ 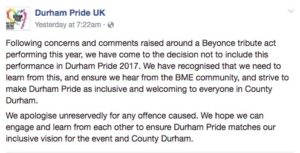 While some were happy with this decision, others considered it “political correctness gone mad.”

Some said Durham Pride’s eventual decision wasn’t enough, as the organizers apparently blocked people on Facebook and Twitter who complained about it in the first place. 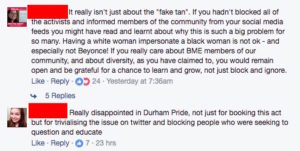 GSN has reached out to Leanne Harper and Durham Pride for comment.