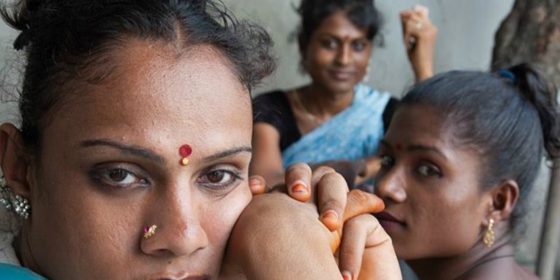 A group of trans women have been the victims of relentless abuse from gangs of men pretending to be trans.

A man allegedly attacked Priyanka Atri with a knife two years ago as she walked to work.

‘I was unconscious for four days. There are CCTV recordings and the police have registered a case… but the man still hasn’t been caught,’ she told The Hindu.

Anita Wadekar assaulted and mugged, but when she was taken to the police, she was the one accused of theft.

‘The police can’t distinguish between transgenders and imposters.’

The women are part of Kinnar Samaj – a trans advocacy organization – say they are being targeted in a suburb of Mumbai.

‘Transgenders who are part of the Kinnar Samaj have been the victims of physical assaults and threats from a group of fake transgenders based in Goregaon,’ Priya Patil, programme manger at Kinnar Samaj said at a media conference.

‘We have lodged a complaint using the Aaple Sarkar App (a crime reporting app). We met the Commissioner of Police and he said the legal process would have to be followed.’

The women say they have allegedly been targeted, harassed and assaulted over the past year.

Women take to the streets

They say the have reported the ongoing incidents to police, but nothing has happened. If police don’t act soon the women plan to protest on India’s Independence Day (August 15).

Akku’s story is especially harrowing. After her brother kicked her out of the family home, her mother gave her money and jewellery. The plan was to use the money to rent her own place.

‘Soon after I left home, around six people arrived in a car and forced me into it,’ she told The Hindu.

‘They assaulted me in the car till we reached a house in Goregaon.

‘They took objectionable videos, took me to Malad police station and asked to lodge a complaint against two men who were their enemies.’