A Republican candidate for the US Senate has praised Russia’s ‘gay propaganda’ law.

Roy Moore has been picked as the Republican candidate ahead of a special election for the US Senate seat vacated by Trump’s Attorney General Jeff Sessions.

Despite a string of controversies surrounding his abhorrent views about LGBT rights, Donald Trump has thrown his support behind Moore, who will go head-to-head with Democratic candidate Doug Jones.

It emerged today that Moore has praised the so-called ‘gay propaganda’ law in Russia, which outlaws speech relating to LGBT rights.

The law has been criticised by human rights bodies as an abuse of power and a brazen attack on free speech, but apparently that’s fine with Moore. 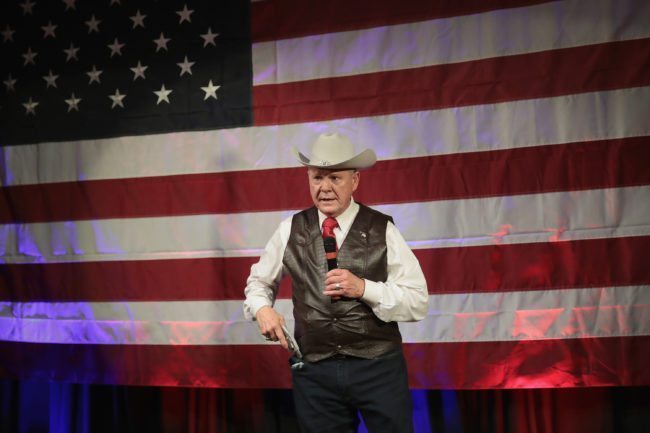 The article addressed Russian efforts to ban a Facebook ‘Pride’ profile picture filter in the country under the gay ‘propaganda’ law.

It lavished praise on the country for its “strong stance in defense of traditional family values” by passing “what is commonly referred to as the law against gay propaganda” to jail “insolent demonstrators”.

Moore is on-record previously saying that “homosexual conduct should be illegal” and compared it to bestiality.

But Trump, who has tweeted his support for Moore, has consistently dismissed fears about the candidate’s homophobic views.

In a press gaggle last week a reporter tried to raise the issue, but Trump insisted: “I don’t see it.”

When Moore’s views on LGBT rights were raised, she said: “I’m not going to weigh in on a specific race ahead of time at this point.”

Asked if President Trump has any opinions about Moore’s incendiary comments, she said: “Not that I’m aware of.”

Sanders insisted: “I have not taken a deep dive on every comment that the Senate nominee has made. But I certainly know where the President stands on those issues, and wouldn’t see any parallel between the two of them on that front.”

Due to Alabama’s heavily-Republican electoral leaning, Democratic challenger Doug Jones has a steep uphill battle to stop Moore from winning the Senate seat.

Trump previously vowed to “campaign like hell” for Moore to win the special election if the primary favoured him.

Moore has also compared gay sex to bestiality, saying: “Just because it’s done behind closed doors, it can still be prohibited by state law

“Do you know that bestiality, the relationship between man and beast is prohibited in every state? It’s the same thing.”

It was also revealed that he has appeared multiple times on a radio show hosted by pastor Kevin Swanson, who is known for preaching that gay people must be stoned to death.

In a 2015 interview Moore himself refused to say whether he supports gay people being put to death.

The candidate formerly served as Alabama’s Chief Justice, but was ejected from the role after abusing his authority in a bid to block gay weddings in the state.

The disgraced justice had issued a string of orders declaring the US Supreme Court ruling on equal marriage “doesn’t apply” in Alabama due to state anti-gay laws, and ordered probate judges to enforce a gay marriage ban.

Moore fumed: “This was a politically motivated effort by radical homosexual and transgender groups to remove me as Chief Justice of the Supreme Court because of outspoken opposition to their immoral agenda.”

It was in fact because of his flagrantly illegal actions.

Moore said: “Because of YOU, tonight, the establishment has been defeated in Alabama!

“We still have a ways to go before December 12th’s general election, and the road certainly doesn’t get easier, but with YOU, the best grassroots army of supporters around, I know we can take on anything together!”