A banner in Australia blames the “Jewish media” for pushing equal marriage.

There has been an ugly spate of homophobic incidents in the country as it holds a public vote on equal marriage.

Earlier this week a mother in Melbourne was sent a letter threatening her children after she put up a rainbow flag.

Last month a cafe was threatened with arson for supporting the Yes campaign while a 14 year old girl received a death threat for supporting marriage equality on social media.

But the No side reached ugly new lows this week, as an anti-Semitic and homophobic banner was unveiled above a motorway.

The banner was flown above the M1 motorway outside Brisbane. 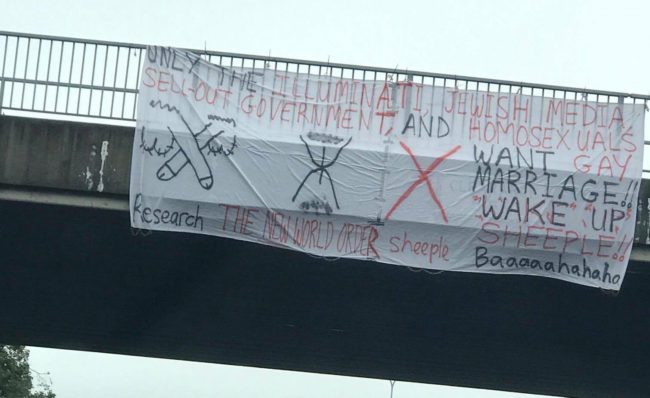 The banner also depicted a crude drawing of two penises and what appears to be two exceedingly anatomically-incorrect vaginas.

The picture was posted on a local Facebook page, where locals roundly mocked it.

One wrote: “How gays have sex with each other. 104% accurate diagram.”

Another added: “Damn Jewish vaginas taking over the planet.”

A third use wrote: “Is that [vagina picture] supposed to be tribadism, or did someone rip two legs off a spider? And why do homophobes keep thinking that penis swordfighting is all gay men do?

“I mean, if two dudes want to get into a johnson joust, more power to them, but that’s not typically how it goes. There are plenty of reference pictures on the internet.

“There’s no excuse for this kind of shoddy research.”

The sign marks a new low in the postal vote campaign, which has rapidly become dirty and devoid of facts.

PinkNews revealed last month that the anti-LGBT Coalition for Marriage is telling activists to play to fears over gay sex and gender issues.

Tony Abbott has become the most prominent voice of the anti-gay lobby as Australia votes on equal marriage – alienating much of his own family in the process.

After Abbott suggested it would be “best” for his gay sister’s children to be raised by a straight couple, his own daughter Frances spoke out for equality, appearing in a TV ad on the opposing side of the debate to her dad.

The ex-leader has taken his opposition to LGBT rights to surreal extremes, lashing out at “transgender marriage” and demanding censorship of a Macklemore performance over gay anthem ‘Same Love’.