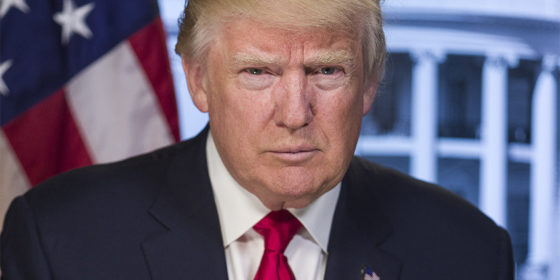 Donald Trump may introduce new policies allowing religious people to discriminate against LGBTIs as early as next week.

Now Human Rights Campaign has told GSN they are expecting Trump to act ‘imminently’ and as early as next week.

If he does, his polices have been widely predicted to be designed to allow Christians to openly discriminate against LGBTIs.

It all comes at the end of a week of bad news for LGBTIs in America.

This week the Trump administration confirmed its nomination of Governor Sam Brownback to the role of Religious Freedom Ambassador.

The social conservative from Kansas has a history of anti-LGBTI laws and pro life campaigning.

And on Wednesday, Trump caused a storm by proposing a trans military ban.

On the Washington Watch weekly radio broadcast produced by the organization, Perkins said:

‘By the way, stand by next week. You’re going to see some follow-up to the president’s executive order on religious liberty.

‘We are going to see government agencies basically put on notice that they have to respect religious freedom. And that is not just the ability to believe, it is the free exercise of religion.’

HRC told GSN: ‘We can’t say how much Perkins is listened to but this administration gives him a much louder voice than ever before.’

The Trump administration has made religious freedom a priority. Vice President Mike Pence has highlighted that violence against Christians is of particular prominence.

He describes the Governor as ‘a man of strong Christian faith who takes this issue seriously.’

Perkins added: ‘We applaud the president’s choice and look forward to a new day for religious liberty under his leadership.’

If the Senate confirms Gov Brownback’s nomination, the role will be filled long before similar jobs. The ambassadorships for HIV, War Crimes and Women remain empty.

By this point in the Obama and Bush administration had confirmed 203 key roles, in comparison to just 50 for Trump.

The 1998 act that created Gov. Brownback’s role was not supposed to be used to harm other freedoms.  The Religious Freedom Restoration Act (RFRA) protects minority religious groups’ constitutional right to freely exercise their beliefs.

The US Department of State sets out:

‘The Office of International Religious Freedom has the mission of promoting religious freedom as a core objective of U.S. foreign policy.’

However, increasingly law makers have been using it as a basis to infringe on LGBTI rights.

In 2015, Brownback signed an executive order in his state of Kansas prohibiting state government from taking action against religious organizations.

The order aimed to protect religious organizations providing adoption services from having to place children with gay couples.

‘The ‘religious exemptions’ laws that groups like the Family Research Council are successfully pushing fly in the face of real American values and open LGBTQ people and our children up to discrimination.’

The ACLU said: ‘Gov Brownback’s view of “religious freedom” has meant issuing a license to discriminate against others, especially against LGBT Kansans.’

American Human Rights organizations including Human Rights Watch, are currently supporting an amendment to the Religious Freedom Act titled ‘Do Not Harm.’

Introduced to the by Congressmen Joe Kennedy and Bobby Scot it will state the 1998 RFRA bill is designed to protect religious freedom. Crucially, also stating that it should not be inflicting harm on other people.

The ACLU said: ‘The Do No Harm Act would place much-needed limitations on RFRA. It could no longer justify discrimination, denial of health care, or other harms.’