A police crackdown on an LGBT event this week in Uganda’s capital may have marked a reversal of strides made in the past year on gay rights in the country, some activists fear.

Police shut down the event Thursday in Kampala, which was part of Ugandan Pride Week, and they arrested 10 of the organizers.

The event, a “Mr. and Ms. Pride” contest, began with costumes, dancing and revelry. But an hour into the event, police arrived and, without explanation, barred all entrances and exits to the venue.

Community activist Hassan Kamoga was there.

“At first I went there at the door to find out what was happening. And then they told me, ‘You need to stay away and you have to keep your cameras [away].’ And I asked one of the policemen if they could let me go out, and they told me, ‘You’re not going anywhere.’ They told people to sit down. They were treating us like children,” Kamoga said.

The atmosphere was one of confusion and anger. Some attendees said police took photos of their faces. One man, apparently in fear of his life, jumped over a balcony railing. Officials said he survived and was taken to the hospital.

After about an hour, officers told the crowd to leave but assured them of police protection on their way out.

Relieved, many attendees cheered the news.

District Police Commander Isaac Mugerwa said the event was broken up because security was too lax and put attendees in danger. He also said that police did not get notice of the event, so it violated the Public Order Management Act. 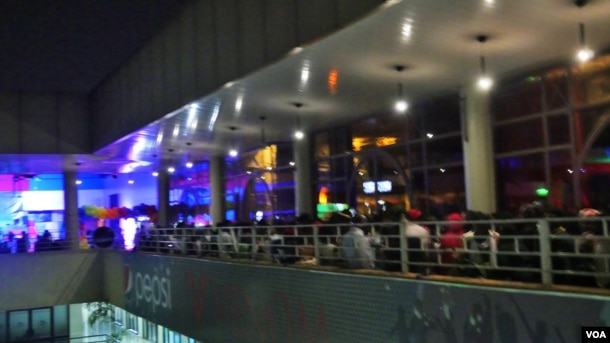 At Club Venom, revelers waited for police to address the crowd. One party-goer, apparently in an act of panic, threw himself over the balcony. Kampala, Uganda, Aug. 4, 2016. (L. Paulat/VOA)

Uganda made international news in 2009 when parliament proposed legislation providing for the death penalty for homosexuality. This was later amended to life imprisonment. The Anti-Homosexuality Act passed and was signed into law in 2014, but was overturned that same year on a technicality.

Homosexual acts are still illegal in Uganda and punishable by jail time; however, LGBT advocates say there has been a marked cooling of tensions this year, as artistic and social spaces for LGBT community members have continued to open up.

The 10 people arrested Thursday were released early Friday, but said they were subjected to harassment and assault while in custody.

Pepe Julian Onziema told VOA that when he went to ask police about their presence at the event, he was arrested.

“So, I was trying to inquire, like, ‘What’s going on?’ And the guy was just, like, ‘Even this one,’ and then he slapped me and I was cuffed. … They pushed us under the truck [seats] and they [were] basically saying we’re homosexuals and saying nasty things,” he said.

Onziema said they were put into cells with hostile inmates.

“One of the guys started hitting me. He was asking me what do I do. He said, ‘You must be homosexual. … There’s a reason why we brought you in here. We have to teach you a lesson.’ The guy just kept on hitting me and hitting me. I’m sure they [police] know what happens in there. By the time they pushed us in, they were telling the inmates, ‘Deal with these ones.’ That means they knew what was going to happen,” Onziema said.