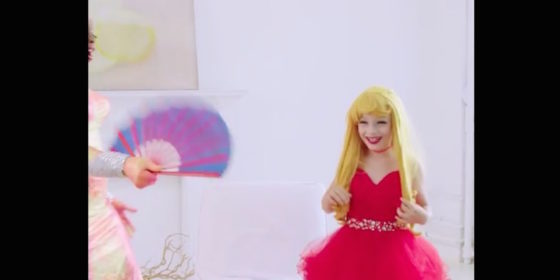 This 8-year-old drag queen is fierce!

Meet Nemis, an 8-year-old who transforms into drag persona Lactatia.

Nemis has been wearing his sister’s tutus since he was about three or four and believes that Lactatia has always been inside him.

Jessica, Nemis’ mom, is supportive of her son’s passion. ‘We just want our kids to express themselves however they see fit,’ she says. ‘As long as it’s respectful and they’re nice people, we really don’t care.’

Dressing up, as well as dancing and performing, makes Nemis feel ‘happy and accepted.’

Jessica recalls when Nemis was about two, he came up to her and asked her to put makeup on him. It turned into a mini photoshoot where Nemis glowed in front of the camera, duck face and all.

And when Nemis was seven, the family began watching RuPaul’s Drag Race. It was then, upon realizing that drag is actually a form of art, that Nemis decided that drag will be his life.

‘I love them because they do what they want to do and they’re not afraid to do it,’ Nemis says of drag queens.

Nemis’ school friends are supportive of his passion for drag as well, even thinking Lactatia is ‘courageous.’

Before Lactatia, Nemis called his drag persona Peaches Demure. Then, a few months ago, Nemis’ sister came up with the name Lactatia and it stuck.

‘Lactatia is a diva at all times,’ Nemis says of his drag persona.

Even though Nemis comes from a supportive family, he’s very much aware that other families will react completely differently upon finding out their child wants to be a drag queen.

‘I don’t think that other people should judge what people do,’ he says.

Watch Nemis transform into Lactatia in the video below, and check out his reaction upon meeting RuPaul’s Drag Race alum, Vivacious.

Vivacious’ advice to Nemis? ‘Keep going, learn your lyrics well, give them face, give them choreography, give them a lot of energy… they will always remember your energy.’

Upon learning that Nemis takes voguing classes, Vivacious tells him ‘By age 12, you are going to be a weapon of mass devastation.’

And we sure can’t wait to see!