The official White House Facebook page uploaded a photo of the First Wives at the NATO conference, naming all in attendance except the husband of out-gay Luxembourg prime minister.

Gauthier Destenay is the husband of Luxembourg’s Prime Minister Xavier Bettel, but was omitted from the Facebook caption.

In an annual NATO tradition, the First Wives of world leaders at the conference pose for a photo together. This year, Destenay became the first gay man in the First Wives photo.

But the White House wasn’t willing to mark the occasion until a huge negative backlash online.

GLAAD called out the blatant homophobia in the comments: ‘What about Luxembourg’s openly gay First Husband?’

After ten hours of the photo caption without Destenay, the White House finally gave in. 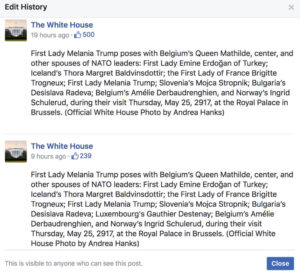 Deputy press secretary to the White House, Stephanie Grisham said: ‘I’m sure it was an oversight. Thousands of photos were taken over the course of a very big, very busy international trip,’ she told the Washington Blade.

This is not the first time the White House tried to erase LGBTI people. When Trump officially assumed presidency last year, it deleted all mention of LGBTI people from their website.

The only mention was the term gay to mean happy.

During Barack Obama’s presidency, if you searched LGBT on the website, you would reach a page highlighting the administration’s victories and policy changes on LGBTI rights.

It celebrated the win on same-sex marriage and featured campaigns like the It Gets Better Project.