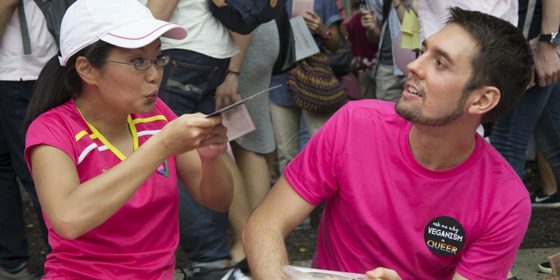 The link between being vegan and LGBTI rights may not be clear to you, and it wasn’t always obvious to me too.

I grew up on a farm in in a conservative area in Canada in the late 90s, eating meat and keeping my sexuality secret.

So when Mercy For Animals in the USA posted on Facebook, highlighting LGBTI celebrities that are vegan, it got me thinking.

Thankfully there were many supportive comments, but there were also some surprisingly negative ones too – most of which the admins removed.

Some of these commenters claimed veganism and LGBTI rights are completely different issues and vegans have no imperative to support our community.

This time last year I wrote an article for Gay Star News, arguing that all LGBTIs should be vegan.

But I also think all vegans should support LGBTI rights.

What does veganism really mean?

Let’s start with the definition of veganism, by the Vegan Society UK:

‘A philosophy and way of living which seeks to exclude – as far as is possible and practicable – all forms of exploitation of, and cruelty to, animals for food, clothing or any other purpose; and by extension, promotes the development and use of animal-free alternatives for the benefit of humans, animals and the environment.

‘In dietary terms it denotes the practice of dispensing with all products derived wholly or partly from animals.’

On the surface, the definition seems to be focused on non-human animals only and eating/purchasing behaviour. This may be where some people stop and may miss the spirit of the vegan movement.

But look below the surface. Why do we vegans choose to not take animal products? It is because we do not want sentient beings harmed through our actions. 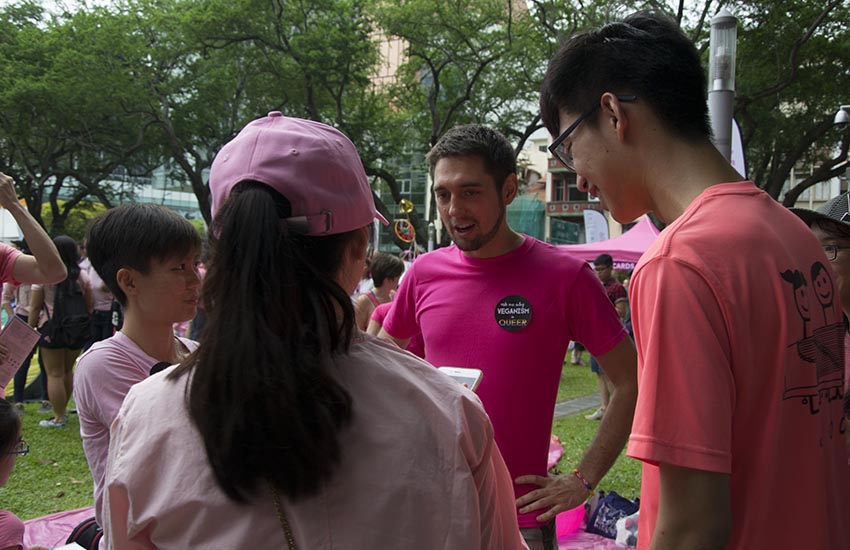 So vegans should want to reduce harm to all sentient beings

In other words, the spirit of veganism is about reducing unnecessary harm in the world.

People are also animals and sentient beings, regardless of their gender or sexual orientation. And LGBTIs are experiencing a lot of unnecessary harm.

In the last year, we have seen homosexuals murdered (ISIS), tortured (Chechnya), caned (Indonesia) and more.

In more developed nations, we are criminalized for having sex (Singapore), banned from getting married (Australia) or stopped from visiting loved ones in hospital (USA). There are still teen suicides by those who are afraid to come out to their friends and family (India).

There is a lot of unnecessary harm.

All movements that are genuine in expanding compassion are intersectional. Mercy for Animals shows it understands this not only by the post it made, but by keeping it up and by changing its social media profile photos to include Pride colors.

And there’s a second reason why vegans might not support LGBTIs.

Society has subconsciously taught all of us to restrict our compassion to exclude non-cisgendered, heterosexual, or gender-conforming people.

Psychologist Dr Melanie Joy explores this in her book, Why We Love Dogs, Eat Pigs, and Wear Cows. The underlying reasons people can be racist, sexist, homophobic, transphobic, or speciesist are the same. We teach people this is natural, normal and necessary.

As vegans, when we engage people about why they eat some animals and love others, we are used to these arguments.

People will say things like ‘it’s natural because our ancestors ate other animals’, or ‘it’s normal because most people eat meat’. Some say it’s ‘necessary because you need it to be healthy.’

Vegans can easily identify misconceptions in all these arguments. We know culture subconsciously conditions people to think it is normal, natural or necessary to kill certain animals. We call this carnism or speciesism.

What the vegans who made negative comments on the Mercy For Animals posts may not realise is they have similar misconceptions when they argue against the LGBTI community.

People use the same arguments against LGBTIs

We all know the most common arguments against gay people.

‘Heterosexuality is normal because most people are heterosexual.’ This argument confuses normal with most common. Just because something is less common does not mean it is bad or abnormal. For example, freckles are normal, but not common and it’s not wrong to have them.

Others argue: ‘Heteronormativity is necessary because otherwise everyone will become gay and our species will go extinct.’ This argument shows a lack of understanding.  We do not learn homosexuality, so we can’t spread it. We have been a minority throughout history.

The underlying concept is this: People defend all forms of oppression in similar ways.

They use similar arguments to claim some races or genders are better than others.

So if you’re a vegan and you do not support LGBTI rights, take some time to see if you can explain your beliefs in a way that doesn’t use the same psychological defence mechanisms as those who defend eating animals as natural, necessary and normal.

Incidentally, despite the negative responses to Mercy for Animals’ post there is a little hope. In Singapore, where homosexuality is illegal, we recently ran a campaign urging vegans to support LGBTI rights, and got only positive comments.

Is support for human rights the ‘logical’ next step for vegans?

Animal rights campaigner Donald Watson created the word vegan. He once explained that veganism was vegetarianism carried through to its ‘logical conclusion’. Could LGBTI and other human rights also be the logical conclusion for veganism?

Let’s choose compassion and reduce all harm in this world – regardless of if the animal is human or non-human.