A Labour councillor has been suspended from the party over social media posts branding Pride marchers ‘evil’.

Cllr Chika Amadi has been a Labour councillor on Harrow Council since 2014, and is also an evangelical pastor.

PinkNews reported earlier today that complaints had been raised over her conduct on social media – where Cllr Amadi has posted anti-LGBT messages without challenge for many years.

In posts this week she liked Pride marchers to paedophiles, before threatening people who complained about her remarks.

The Labour Party has now confirmed that Amadi has had her party membership suspended.

A Labour Party spokesperson told PinkNews: “Chika Amadi has been suspended from the Labour Party pending an investigation.”

In her posts this week, Amadi had shared a story from anti-LGBT Christian website LifeSiteNews. The story uses a misleading viral photo from seven years ago to claim that Pride parade marchers are ‘traumatising’ little girls with nudity.

Cllr Amadi wrote: “Nothing but paedophilia being labelled liberalism adults polluting children with their senselessness.”

The comments were challenged by LGBT campaigners, but she responded: “Evil. If you dare walk naked in front of my child God will give you terrible assignment that will put you to perpetual sleep. Be warned.”

She added: “Keep off my tweets you are breaching my privacy.” 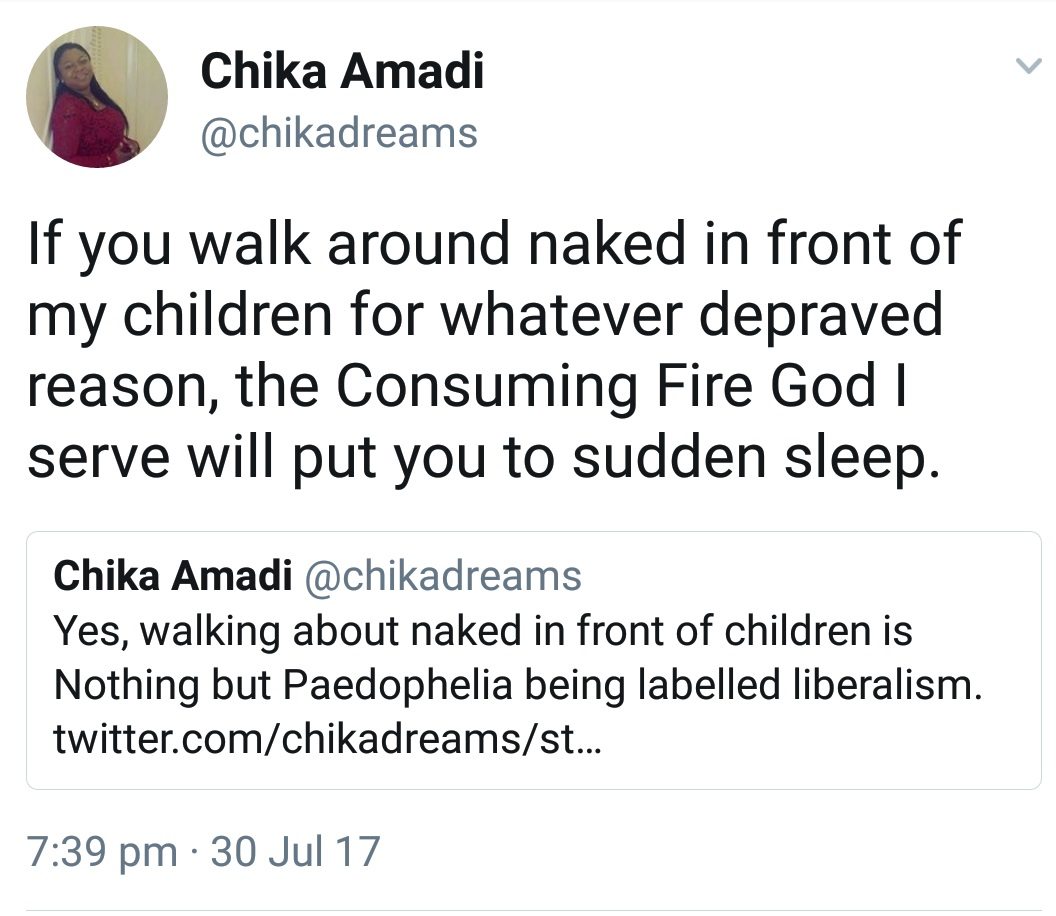 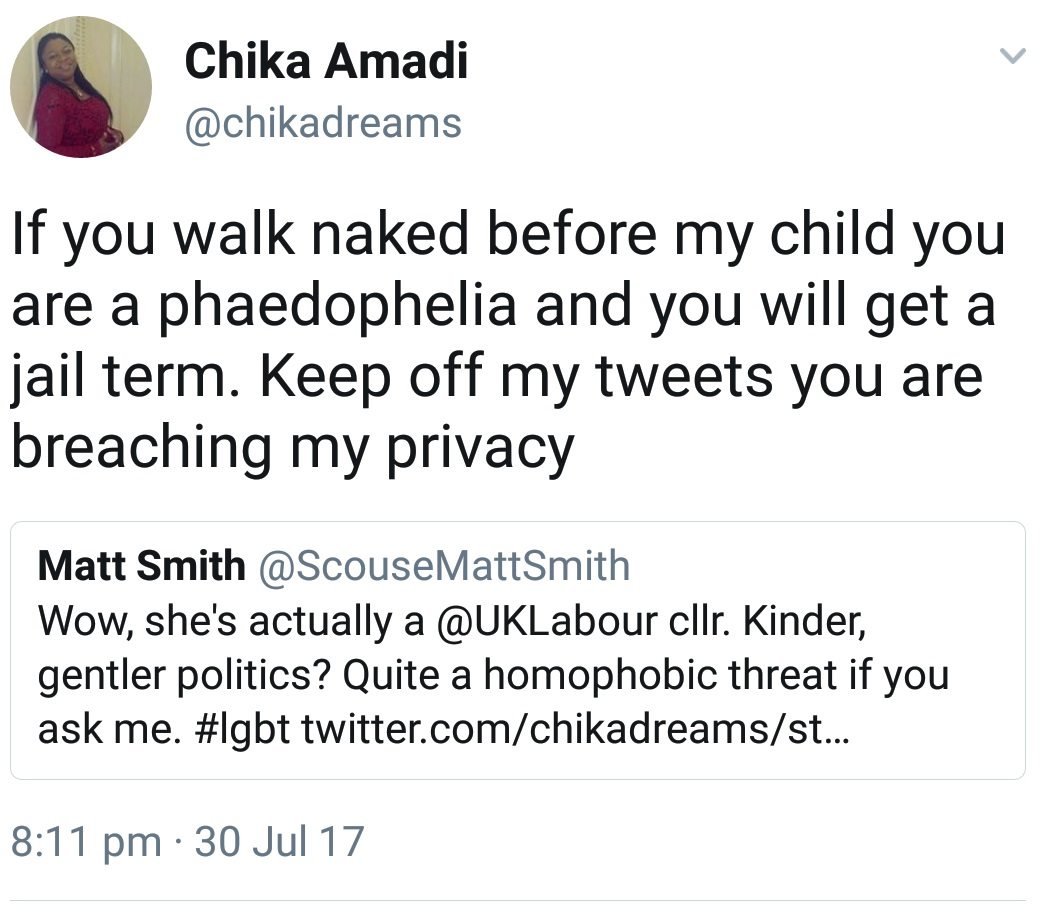 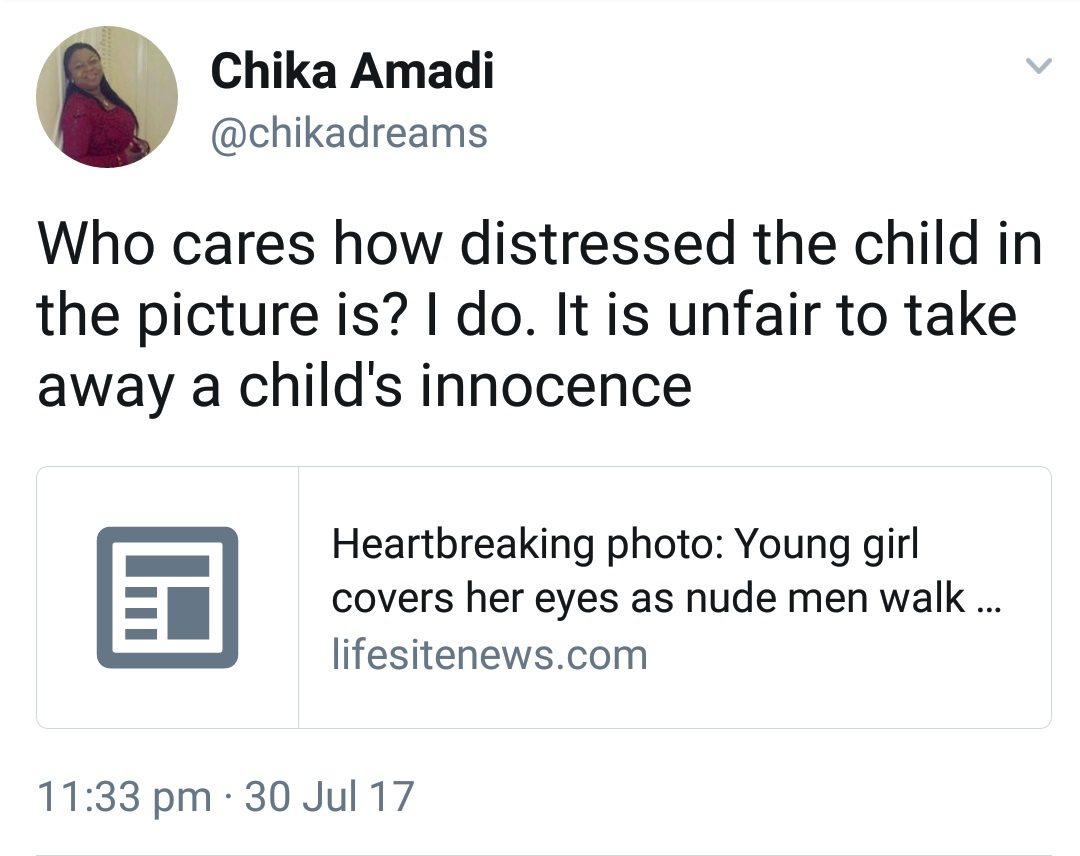 Responding to critics, she insisted: “You did not vote me in and You cannot remove me. Keep your mouth where your money is. Keep busy and stop nosing around.”

After the chair of LGBT Humanists, Chris Ward, shared her comments, she told him: “I do not talk to expired people. Try me, try my God. Walk naked in front of my child, You will know whether you are normal or not.”

She threatened: “Be warned, if u try to come against me. I have done nothing against u. God will give you terrible assignment that will silence you forever.”

However, it has since emerged that the councillor has a history of unchallenged homophobic comments.

On her public Facebook page last month, Cllr Amadi posted: “Recently one respectable man in my constituency questioned me on my faith especially on homosexuality (…) I warned him not to try me next time.

“Anyone who wants to bring me down from my political career because of my faith and stand on the word of God will encounter the burning anger of the God that I serve.” 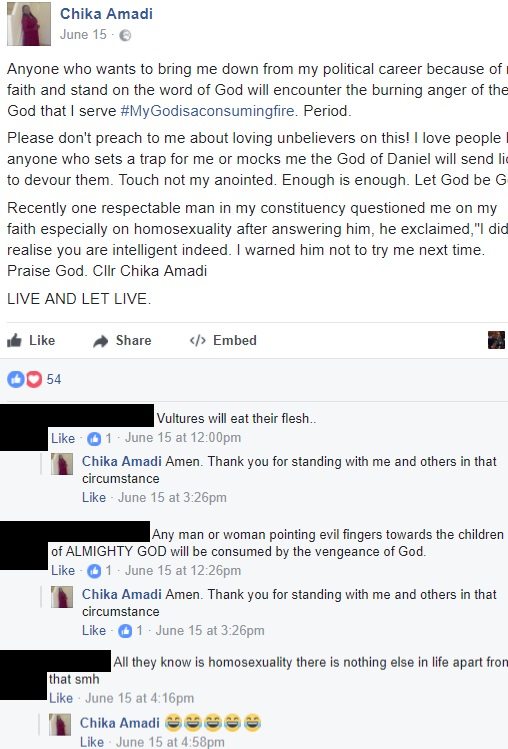 When an associate claimed that “Vultures will eat their flesh”, she added: “Amen. Thank you for standing with me and others in that circumstance.”

Another Facebook friend added: “All they know is homosexuality there is nothing else in life apart from that smh”. Cllr Amadi responded with five laughing emojis.

Anti-LGBT posts on her Facebook profile date back many years. In 2013, she shared a post rejecting calls to legalise homosexuality in Gambia, which says: “Homosexuality is anti-humanity. I have never seen homosexual chicken or turkey. If you are convicted of homosexuality in this country, there will be no mercy for offenders. We will put you in the female wing of the prison.”

The Labour Leader of Harrow Council, Sachin Shah, told PinkNews: “As Leader of the Harrow Labour Group, I take any complaints of homophobia very seriously. All comments will be fully investigated.”

Her comments had been condemned across political parties, with the Conservative group on the council pursuing a complaint against her.

A statement from LGBT Labour said: “Today, LGBT Labour has been made aware of offensive, distasteful and homophobic remarks made by Cllr Chika Amadi against the LGBT community.

“These comments have no place in modern society, and are unacceptable from a Labour Party Councillor.

“LGBT Labour has been in contact with the Labour Party today calling for the immediate suspension of Cllr Chika Amadi pending an investigation in to her online actions.

“We also call on Harrow Council Labour Group to suspend Cllr Chika Amadi and for her to be reported to the Standards Committee.”

“I trust the Labour Party will withdraw the whip from her immediately, I think what she said goes way beyond what might be considered an error of judgement or clumsy wording.”

London Assembly member Caroline Pidgeon told PinkNews:  “These comments are clearly disgusting and have no place in a society that is open, tolerant and united. It is incredible that in 2017 anyone elected as a Labour representative to a London Borough is expressing such views.”

A Liberal Democrats spokesperson had told PinkNews: “These comments are clearly disgusting and have no place in a society that is open, tolerant and united.”

Chris Ward of LGBT Humanists had told PinkNews: “Whilst it is plain and clear that this councillor’s views are not that of the wider Labour Party, which has a proud history of championing LGBT+ rights, it is an example of how religious privilege allows such individuals an exemption on horrifically homophobic views in what is otherwise a progressive political party.

“Homophobia is homophobia. It harms people whether or not it’s done under the auspices of a religious belief and it’s up to political parties to treat it just as seriously.

“Cllr Amadi’s continued membership of the Labour group in Harrow and the wider Labour Party is baffling, and Harrow Labour should suspend her and reinforce its commitment to LGBT+ people in the borough.”