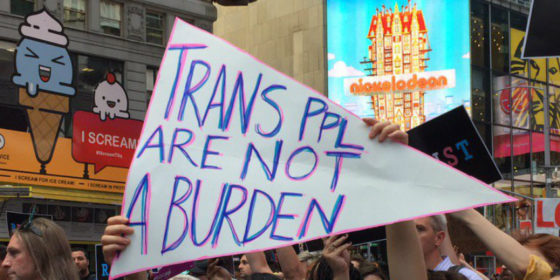 According to a new Reuters opinion poll, a majority of Americans support transgender military service. This opinion directly opposes Donald Trump’s proposed ban on transgender people serving in the military.

In the 26-28 July poll, a majority of 58 percent of Americans said yes to the question: Should transgender people be allowed to serve in the military? The overall sample size was 1,249. Broken down, 533 Democrats and 434 Republicans participated.

Democrats are largely in favor, with 83 percent saying yes and 8 percent saying no. Republicans, meanwhile, are more divided. 32 percent support their service, while 49 percent believe they should not. The full graphic poll can be seen here.

Response to the proposed ban was swift last Wednesday. Many people condemned the ban and several emergency protests popped up across the country. Furthermore, Trump’s tweets pre-empted a decision by the military itself. A day after the tweets, the Joint Chiefs released a statement there will be ‘no modifications’ to the US military’s transgender policy at this point.

The support of transgender service reveals decades of progress. As many noted, Trump’s proposed ban fell on the anniversary of President Harry Truman’s executive order desegregating the US military. However, as an analysis in the Washington Post notes, most Americans in 1948 opposed desegregation. In fact, only 26 percent supported it. Compare that to today’s 58 percent approval of transgender military personnel.

The reaction to the proposed transgender ban follows a pattern since Trump’s inauguration. Policy announcements are abrupt and often via Twitter. Backlash, protests, and dipping poll numbers often follow.

Approval ratings for Trump hit a historic low, dipping below 40 percent. According to FiveThirtyEight, approval is now at 38.2 percent. Various other polls confirm this number, give or take. Gallup has approval even lower at 37 percent, while Rasmussen, often most favorable to Trump, is the highest at 39 percent. This is the first time a President has had such low numbers this early on in a term.