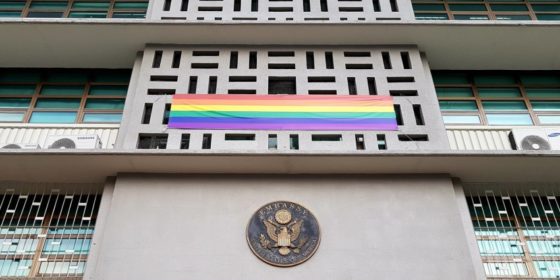 South Korea’s LGBTI people will go ahead with their planned Pride march this year, despite vocal protests from conservative Christians.

LGBTI issues are very taboo in South Korea even though homosexuality is not illegal.

Organized Christian groups turn up in their hundreds every year to protest Seoul’s Pride parade. They call for LGBTI people to ‘repent’ their ‘sins’.

The Christians opposing Pride turn up to the march and sing hymns through loudspeakers in the hope of drowning out the parade. They also hold petitions calling for public venues to be restricted to Pride events.

‘We do not want them to showcase homosexuality in public, which can corrupt the minds of our children,’ pastor Hong Ho-soo, secretary general of the Homosexuality Countermeasure Council for Korean Churches told the South China Morning Post.
‘It’s okay to celebrate whatever you are at home or privately. Just don’t do it in front of others.’

The parade forms part of the Korea Queer Culture Festival a two-day festival celebrating all things LGBTI in Seoul.

Kang Myoung-Jin runs the festival and said protestors throw things at Pride participants. Some even lie on the parade route to block people from marching. He said some even hurl abuse at passers-by.

‘They say, ‘Hide yourself. Live in the shadows, because who you are is so harmful and something to be so ashamed of’,’ he told SCMP.

‘The Korea Queer Culture Festival aims to promote minority groups whose human rights have been long neglected by the majority,’ Kang told the Korea Herald.

‘We should encourage people to break free of oppression and march out to achieve our rights.’

A leading researcher said Christian groups are well organized because they are influential and well-funded.

‘It’s partly because the Protestant churches are the most well-connected and well-financed lobby machine in this nation,’ said Kim Jin-ho, chief researcher at the religious think tank, Christian Institute for the 3rd Era.

‘For them, the anti-gay campaign is another way to maintain their political influence in this time of crisis.’

The US is on their side

In an act of solidarity a giant rainbow flag was hoisted on the front US Embassy building in Seoul.

‘The US Department of State affirms its solidarity with the human rights defenders and civil society organizations working around the world to uphold the fundamental freedoms of LGBTI persons to live with dignity and freedom,’ the embassy said in a statement.

‘We will continue to support the human rights of LGBTI persons together with like-minded governments, businesses, and civil society organizations globally.’